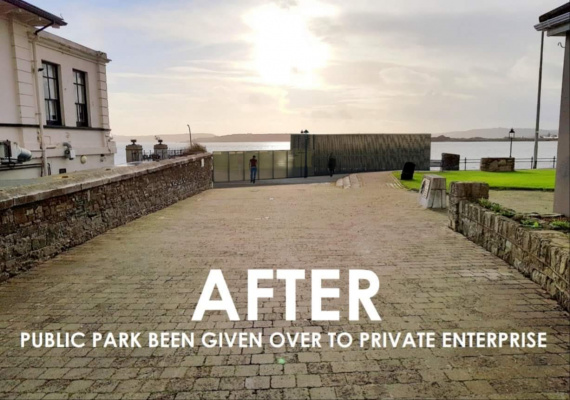 Cobh's Titanic "White Star Line" Pier is not for Drowning. Save Our Promenade

A planning application no 17/7029 by titanic experience Cobh limited has been sought to erect a pedestrian walkway and viewing platform over the existing titanic pier with sail style canopies, associated conservation works to the original pier structure. the walkway structure will be supported by circular hollow steel piles driven into the seabed. it is also proposed to install a kiosk structure, turnstile and glass screen on the south west corner of the parade grounds. the kiosk will function as the ticket office and entrance to the walkway. titanic pier, adjacent to 20 casement square ballyvoloon, Cobh co. cork.

This will not be a preservation project or an enhancement project for the Titanic Pier Also known as White Star Line's Pier and Scott's Pier. This project is profit driven and will NOT be open freely to the public and to the people of Cobh and The Greater Island. They are looking to use OUR PUBLIC Promenade for private use while building a Ticket Kiosk and wall to charge people a fee to view the pier. The design of the project is not in keeping with our Heritage buildings. The proposed Kiosk and wall will severely damage the view of our Harbour from several viewpoints within the promenade that has always been our joy to behold when taking a stroll in our Historic Park. For over a century this pier was left to deteriorate with many calls form the public and local representatives to invest in its preservation and enhancement . Now they want to simply build over it, take public land and charge a fee to view it with a design that leaves a lot to be desired while upsetting the Beauty of the Promenade against the historical foundations the peoples promenade was originally built for way back in the mid 18th Century.

Please sign and share this petition to show a united effort in making sure what is done to our pier is in the best interests of the towns heritage and not for profit or private gain. We have over 1000 signitures so far. Closing date for appeal is this coming wednesday 03/10.2018