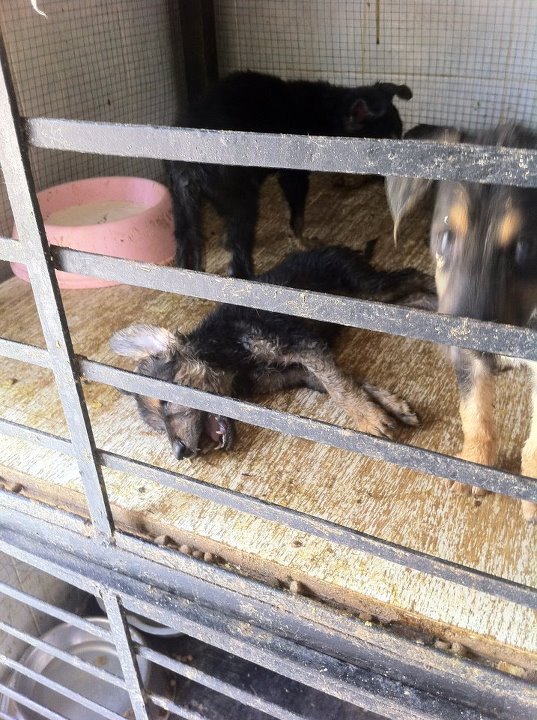 IN THE ATTENTION OF HURGHADA'S GOVERNOR AND VETERINARY DEPARTMENT

Animals caged or chained in the sun at more than 40 degrees with no shadow above, sick animals with no water or food and lately the animals started to die one by one. At least 1 cat and 1 dog have been found dead by some people passing by.During the night and the time there is nobody there, the place is full of excrement and animals are lying in their own pee.This is ABSOLUTELY NOT ACCEPTABLE! Children playing in the area and curios to see the animals can be very fast infected. That place should be closed as soon as possible!!!

10 REASONS WHY ISLAMIC JUDGEMENT SHOULD CLOSE THAT PLACE:

1. Mr Mahmud, the owner of that place he is selling sick dying animals while the Qur'an Majeed dwells on this theme repeatedly to emphasize the point that man should bring himself into harmony with nature, according to the laws of God -- as all other creation does: Seest thou not that unto Allah payeth adoration all things that are in the heavens and on earth -- the sun, the moon, the stars, the mountains, the trees, the animals, and a large number among mankind?

2. The caged animals suffer from a big distress and according to A Dutch team of scientists, they have found scientific evidence of mental suffering in animals. They have discovered that, like the human brain, an animal's brain too releases a substance called 'Endorphin' to cope with emotional distress and pain, caused by frustration or conflict. This substance is 100 times more powerful than morphine. (This was reported in the newsletter of Compassion in World Farming Agscene, August 1985, 20 Lavant Street, Petersfield, Hants, England).


3. The animals are suffering of lack of water and food when the Coran says: Then let man look at his food: how We pour out water in showers, then turn up the earth into furrow-slices and cause cereals to grow therein - grapes and green fodder; olive-trees and palm-trees; and luxuriant orchards, fruits and grasses….as Provision for you as well as for your cattle. (Qur'an 80:24-32). And He it is Who sends the winds, as glad tidings heralding His mercy. And We send down pure water from the clouds, that We may give life thereby, by watering the parched earth, and slake the thirst of those We have created - both the animals and the human beings in multitude. (Qur'an 25-48,49).


4. Coran sais: "Actions shall be judged according to intention." (Al-A'amalo binniyah) and Mr's Mahmud intention is to sell as many animals as he can for his own profit even if the animals are sick and dying. There are costumers that bought animals and few days after died in sickness.

5. Mr Mahmud has no interest in giving the minimum respect towards the animals he sells and according to the spirit and overall teachings of Islam, causing unavoidable pain and suffering to the defenseless and innocent creatures of God is not justifiable under any circumstances.


6. Profet Muhammad (saaws) teaches us that mental cruelty of animals is very important as well and the animals suffer of big distress. Examples from Sunna: We were on a journey with the Apostle of God(s), and he left us for a while. During his absence, we saw a bird called hummara with its two young and took the young ones. The mother bird was circling above us in the air, beating its wings in grief, when the Prophet came back and said: 'who has hurt the FEELINGS of this bird by taking its young? Return them to her'. (Narrated by Abdul Rahman bin Abdullah bin Mas'ud. Muslim. Also Awn (Ref. No. 32) Hadith No. 2658. Also "Guillaume' (Ref. No. 57); p. 106).It is reported by the same authority that: "a man once robbed some eggs from the nest of a bird. The Prophet(s) had them restored to the nest." (id).

7 Cats and dogs in the cages are left for hours without water and food while The Prophet(s) told his companions of a woman who would be sent to Hell for having locked up a cat; not feeding it, nor even releasing it so that it could feed herself." (Narrated by Abdullah bin 'Omar. Bukhari, 4:337; recorded in Riyad (Ref. No. 28), Hadith No. 1605; p. 271. Also Muslim, Vol. 4, Hadith No. 2242. English translation by Abdul Hamid Siddiqi; Sh. Muhammad Ashraf, Lahore, Pakistan; 1976; Vol. 4, Hadith No. 5570; p. 1215. (According to the English translation, this Hadith was also narrated by the Abu Huraira and by Naqi who had heard it from Abdullah); Hadith No. 5573; p. 1215.) This Hadith has been recorded by almost all the authentic books of hadith, as the Re. No. 53 will show)

8. Animals are kept in small dirty cages when Islam sais: To catch birds and imprison them in cages without any special purpose is considered abominable. No advantages and no urgency of human needs would justify the kind of calculated violence which is being done these days against animals, especially through international trade of livestock and meat. One of the sayings of the Holy Prophet Muhammad(s) tells us: "If you must kill, kill without torture."


9. Islam sais that "animals in the service of man should be used only when necessary and their comfort should not be neglected", but the animals in the shop have no comfort at all. The Prophet(s) once passed by a lean camel whose belly had shrunk to its back. 'Fear God' he said to the owner of the camel, 'in these dumb animals and ride them only when they are fit to be ridden, and let them go free when it is meet that they should rest. (Narrated by Abdullah bin Ja'far. Awn (Ref. No. 32); 7:221; Hadith No. 2532)


10. Animals are breaded over and over for the sake of money when Islam sais: "Those who take undue advantage of other species break the Divine Law of equilibrium in nature - and nature never forgives."


WE ASK THAT THE LAW IS BEING REINFORCED AND DEAL ACCORDINGLY TO :

Article 355 Individuals guilty of the following are punished by penal servitude: “First: Willfully killing without purport a riding animal, a carrying beast, a towing beast or any other type of livestock or extensively harming any of them.” Any individual attempting to commit any of the above mentioned crimes at night will be sentenced to penal servitude for a period of no more than 1 year, or will pay a fine that will not exceed 200 LE.”