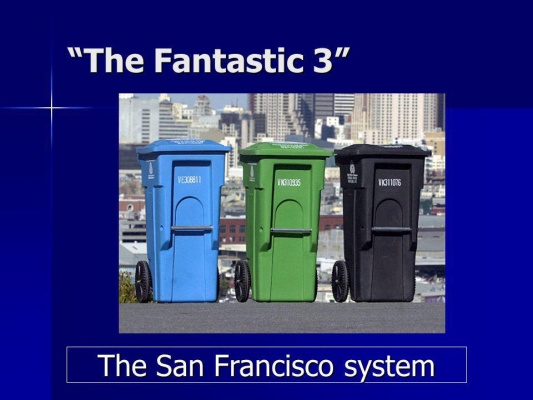 Dear Recology, we ask that you please create more 3 bin systems around the city, but at the same time elaborate on your ways on how you educate people about the system.One issue I’ve experienced in the community is trash everywhere. For example, whenever I'm on my way to school or just anywhere in the city I see food wrappers or cup holders basically just food related things all over the floor or also if people don't see a trash can nearby they just drop it on the floor. I think littering is an important issue to address because littering is currently affecting not only the air that we breathe in, it's also affecting the water that we use on a daily basis.Additionally, according to [There's something in the water],(In the documentary they discussed how they did not have a proper place to put all the trash. They created a landfill right next to the houses and since they had piled up too much trash and had more space to put the rest, they burnt all the trash which not only affected the peoples breathing but also their living environment). This shows that littering is an important issue because if people consume too much of a product then they end up creating more and more trash which means there will be nowhere to put it .If Recology elaborates on their teaching ways about the 3 bin system at the same time as putting 3 bin systems around the city then more people will understand what the purpose and need for the 3 bin system is will happen. It is important that we educate others so that we remove the need to have sorting and landfills. If this happens then it will remove a large portion of littering and emissions on earth.