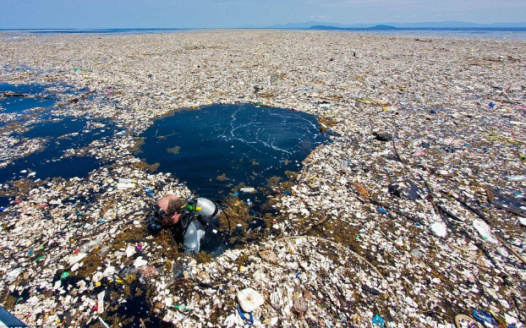 The Great Pacific Garbage Patch is located in the northern Pacific Ocean and contains tons of marine debris. The Patch is roughly twice the size of Texas and spans from the West Coast of North America to Japan. Most of the debris is plastic broken down by the sun in photodegradation and become microplastics which are harder to clean up and see.
The marine debris in this area is harmful to ocean wildlife because this trash can be mistaken as food. Not only can trash be mistaken as food but marine mammals like seals can get stuck in abandoned fishing nets and drown in what is called "ghost fishing". The debris is also harmful to the food webs in the pacific ocean because the microplastics and other trash gather along the ocean surface and block the sun from reaching phototropic organisms, like plankton or algae, who live beneath the surface. Animals who feed on these phototropic organisms could be losing a whole food source if the populations are threatened by the debris. Plastics also release pollutants into the water.
If the United Nations could create a plan to clean up the Great Pacific Garbage Patch or prevent it from increasing in size, it could preserve the ocean environment and control the amount of plastic pollutants in the water. By implementing a plan to clean up the marine debris, not only would wildlife be saved but so would humans since we eat food coming from the oceans. It would reduce the amount of toxins we eat that are taken in by marine organisms.