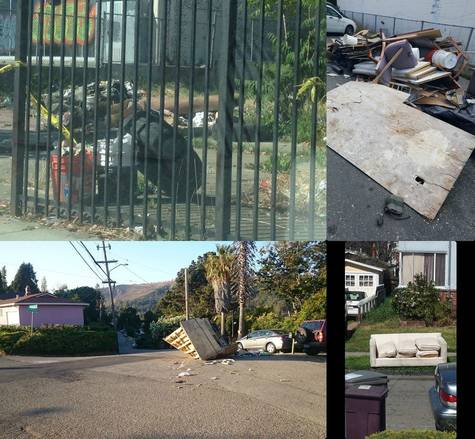 513 people have signed this petition. Add your name now!

We are concerned residents and supporters of East Oakland. Through online and face to face discussions, we have come to agree that the general level of sanitation and enforcement in East Oakland has been insufficient for the amount of waste being generated and dumped in this part of the city. In fact, we are in agreement that at this time in particular, there is abundant blight throughout East Oakland. It seems everywhere we look these days, on almost every block, on/off ramp and underpass, there are piles of accumulated litter, dumped garbage and broken large objects such as mattresses and other furniture in various stages of decay.

While the app SeeClickFix has been helpful in addressing some specific incidences, it is not sufficient to reverse the general problem. We are happy to have noticed that other areas of the city, such as downtown, Temescal, Grand/Lake, Rockridge, Montclair, are better maintained by the city and kept much cleaner than East Oakland. Thus we can see that it's not an issue of the city lacking resources, since there are obviously resources being allocated in other neighborhoods. Rather, it seems the sanitation department has overlooked this part of Oakland, possibly not realizing the problem has been snowballing. The lack of attention to East Oakland has resulted in the accumulation of a great deal of trash that will not be easily cleaned up. For these reasons, we are hereby petitioning for the above mentioned stakeholders, and the Oakland Mayor's Office in particular, to spearhead an effort that will:

We are including Oakland's three most prominent sports teams in this petition because they are East Oakland's most visible corporate citizens. While much talk and media attention is being given to possible future developments such as Coliseum City, the reality of the present moment is that the streets in the vicinity of the existing facilities are full of rotting garbage and broken/abandoned furniture. We would like to see our formidable corporate citizens use some of their media clout and charitable giving to help raise awareness and clean up the area that is so proud to have them as neighbors.

Regardless of what part of the city we are in, we all share in the common goal of making Oakland a safe, livable and prosperous community. We appreciate your attention to this matter, and we look forward to seeing you take immediate action.