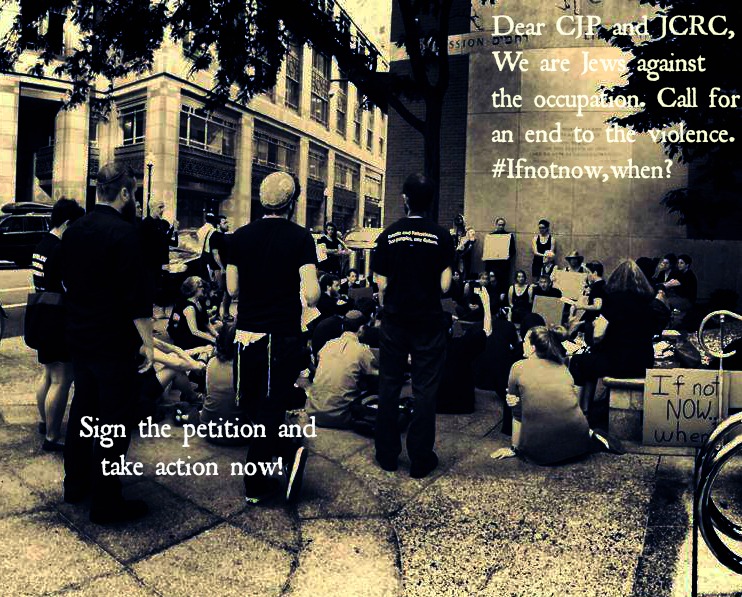 CJP and JCRC of Greater Boston: Support freedom and dignity for all in Israel/Palestine

This petition is written by If Not Now, When? Boston. If Not Now, When is a movement of young Jews coming together to demand that the American Jewish community support an end to the siege and assault on Gaza, an end to the occupation and freedom and dignity for all people in Israel/Palestine. Please visit https://ifnot.net for more information or find us on Facebook and Twitter.

During the Days of Awe, we look to the year that has just ended. Our hearts are heavy, as we once again survey the violence and trauma Israelis and Palestinians have experienced. We do not accept this state of loss and we are committed to a better future in 5775. We demand that CJP and JCRC join our call to end the occupation of the West Bank and East Jerusalem, stop the blockade of Gaza, and forge a path towards freedom and dignity for all in Israel and Palestine.

Before the gates are locked and the book of life is sealed, we are considering our roles, and ask you to consider yours. Hillel, the Jewish sage of the 1st century, posed three questions that ring out across millennia. This moment demands action; We come together to answer Hillel’s call.

If we are not for ourselves, who will be for us? We are part of the Greater Boston Jewish community, and while we hold a diversity of convictions, our shared tradition impels us to a belief that every human being is valuable and deserving of the freedom and opportunity to forge their own future. So long as the Jewish people occupy and rule over another with military force, our commitment to this belief is not upheld. Jewish liberation cannot and will not be complete so long as Palestinians are not also free.

If we are only for ourselves, who are we? This past summer we witnessed Israel’s third military operation in the Gaza strip in the past six years. Not only are we grief stricken, we are outraged. Outraged that so many speak of Palestinians as if their lives were worth less than our own and by the justifications offered for the killing of so many. We are especially outraged at those who have bypassed opportunities to stop this nightmare. In doing so, they have resigned themselves, their country, and their people to perpetual occupation and violence.

If not now, when? The time is now. The heartbreak and urgency we felt this summer remain within us as we focus on chesbon hanefesh, soul searching, and teshuva, repentance. We reject the view that “we have no choice,” that this violence is necessary and inevitable. As we are called to repent, renew and change, we choose to act. We come together to say — enough. Too many lives have been lost in our name.

We are here to demand that our Jewish institutions, like CJP and JCRC:

- publicly recognize that all human life, both Israeli and Palestinian, is created in the image of God, B’Tselem Elohim, and is therefore precious and worthy of respect;

-publicly recognize that Israeli actions are directly resulting in the massive loss of Palestinian life and devastation of Palestinian access to basic human needs;

-publicly state your opposition to the the occupation of the West Bank and East Jerusalem as well as the blockade of Gaza and;

-publicly call for a comprehensive diplomatic solution that includes an immediate freeze on all construction and approval of settlements.

There can be no repentance or change until these beliefs are recognized. We demand that these institutions hear and acknowledge all Jewish voices, not only the voices of those who stand behind every action of the Israeli State. We believe the Jewish community has the power and values to create a new vision for the region in solidarity with Israelis and Palestinians.

In this new year, we demand change. Do not accept another year of violence and death. Another year where the war will continue, hatred will bloom, and no one will be safe. Do not wait. Join us in demanding an an end to the occupation and freedom and dignity for all people of the region. As the shofar awakens the Jewish community in these days of reflection, so too will our voice awaken the Jewish community to create this necessary change.