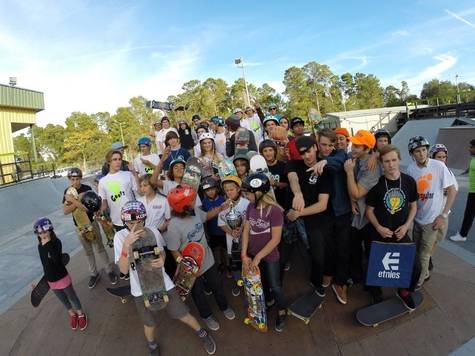 For those of you who are unfamiliar with Graffiti Skate Zone here is a little history regarding the park. Graffiti Skate Zone (GSZ) has been in existence for over 16 years. It’s located in Palm Bay, FL behind the recreation center on Pt. Malabar Boulevard. It is a city-owned skate park located on city property; the city contracts out the actual management/operation of the park to Dan Hatcher.

During his tenure, here are a few highlights of GSZ:

On September 28th, 2016, the city of Palm Bay, FL Parks and Recreation division abruptly shut down operations at Graffiti Skate Zone. Their reasoning was that Dan had not purchased the yearly additional insurance on the property. Needless to say, this was extremely disturbing, and it completely SHOCKED the community! Here is what most people don’t know. For over two years, Dan had been meeting with the city and parks and recreation, informing them that he needed to renegotiate the original contract he had with the city from years ago to bring the contract more in-line with current procedures of city skate park management. He also told them he would not be purchasing the additional insurance because it was too costly and completely unnecessary because of the new Florida State Statue 316.0085. This insurance requirement is a burdensome mandate by the city of Palm Bay. It is no longer necessary according to Florida Statue, but the city is the one who is stating that it is required. This is the city’s first excuse for closing the skate park.

After the closure, the community mobilized and in October was able to get on the city council’s agenda to provide a presentation showing the mayor and council all the positive impact GSZ has had on the community. The turnout was tremendous with everyone wearing their Save GSZ shirts. During the comments segment, several people spoke about how GSZ and Dan helped them during their teenage years. These people have grown up and become productive professionals in our community. They even mentioned how they take their own children to GSZ. Current users of the park spoke about how GSZ is home to them and how much of an impact the park has made on their lives. Parents informed the council of the importance of a supervised facility for them and how motivating it is to see the encouragement between all the kids. There were tears, sad faces, and pleas from all who spoke for the mayor and council to please help re-open the park. The council looked at this group; acknowledged their polite and informative comments; and gave them hope that the skate park would be open again someday. When? Who knows? Hope has faded as no answers, resolutions, or information is forth coming.

Calls to the city, mayor, and park and recreations have not been returned. The excuse of the insurance requirement has now been hushed since everyone understands the Florida Statue. Now, the next excuse is we can’t talk about the skate park because of a pending lawsuit against the city.

Well, let’s tell the truth about this one. That lawsuit is two years old. The skate park was operating the entire time the lawsuit was filed. Furthermore, the lawsuit against Graffiti Skate Zone was dismissed over 6 months ago. So no one understands why there is still a lawsuit against the city. Maybe if the council or city attorney would communicate with Dan, his attorney could inform them regarding the dismissal. But they will not communicate. They just hide behind pending litigation. Communication is vital to reaching a resolution.

Meanwhile, hurricane Matthew blew through destroying the skate park. So there it sits. No one can start cleaning up or rebuilding, and we are getting no answers from the city. Just excuses! So people who are usually active and outdoors at GSZ cannot use it, and it appears the city has no sense of urgency to do anything about it. But we can. Demand that the city re-open the skate park! Sign this petition today!

Ironically, at this very moment, the mayor is promoting the Brevard County Mayors Fitness Challenge. We’ll show you a fitness challenge – re-open GSZ and they will come open heartedly ready to exercise year round!

Time is crucial. It will take major time to clean up and rebuild the park. We are tired of excuses. We want action! Re-open GSZ! Let the legend and legacy of GSZ live on for today’s generation and the next.