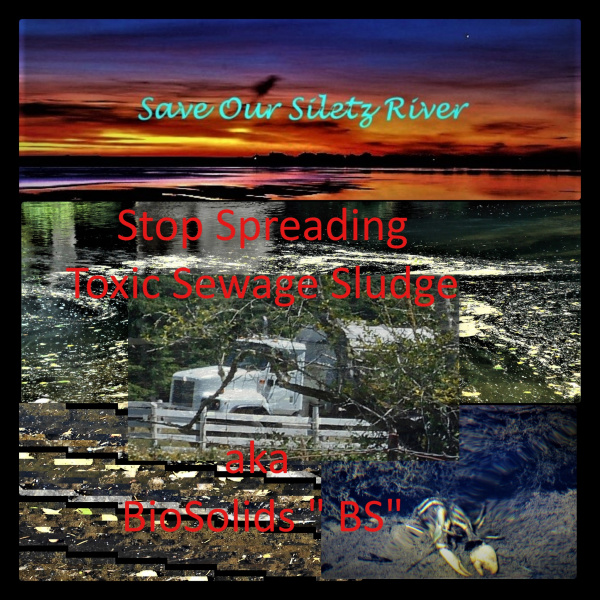 Save Our Siletz River Oregon 0

Save Our Siletz River Oregon 0 Comments
138 people have signed. Add your voice!
69%

THE SILETZ RIVER IS THE WATER FOR THE CITIES OF NEWPORT, TOLEDO, SILETZ & SEAL ROCK!!

City of Newport STOP the LAND APPLICATION of TOXIC Sewage Sludge aka "Biosolids" along the Siletz River and Its watershed!

FOR THE HEALTH OF OUR COMMUNITIES:

The results of a Requested Report from Oregon Chronic Disease & Cancer. We requested just the Siletz/Toledo portion of Lincoln County Cancer Rate.

The most current data we were able to have the data run is for 2011-2015.
• TOLEDO - SILETZ - LOGSDENhas a LOWER overall cancer rate compared to the est of Oregon.
• Cancer sites that were HIGHER than the state were:

Lincoln County 2017 had a SIGNIFICANTLY HIGHER FETAL DEATHS than the State Rate:

DUE to the OVERWHELMING and PROVEN SCIENTIFIC FACT that this practice is NOT SAFE for the ENVIRONMENT and/or PEOPLE. Your Waste Water Treatment Plant CANNOT remove ALL THE TOXINS nor can they remove all the PFAS/PFOS - PLASTICS!!

Nov. 15, 2018 EPA IG At A Glance: EPA Unable to Assess the Impact of Hundreds ofUnregulated Pollutants in Land-AppliedBiosolids on Human and the and the Environment "...61 designated as acutely hazardous, hazardous or priority pollutants in other programs..." https://www.epa.gov/sites/production/files/2018-11....

Microplastics in drinking water: A review and assessment:https://www.sciencedirect.com/science/article/pii/..

"LAMONT, Calif. — Victor Gutierrez contracted valley fever, an illness caused by a soil-borne fungus, and he thinks he got it in the summer of 2011 when he worked in the nectarine orchards of California's dry, dusty Central Valley..."

"...Coccidioidomycosis or cocci (pronounced "coxy"), the fungus that causes valley fever, thrives in dry, undisturbed soil. It becomes airborne when that soil is disturbed — whether it's by dirt bikes, construction crews, or farmers putting in new fruit or nut orchards. It can travel on the wind as far as 75 miles away..."

"..The valley fever fungus might actually expand its territory with climate change," said Lauer, pointing to the fact that cocci spores were found in Washington state in 2014..." https://www.nbcnews.com/news/us-news/potentially-d...

The Gram-positive cocci are the leading pathogens of humans. It is estimated that they produce at least a third of all the bacterial infections of humans, including strep throat, pneumonia, otitis media, meningitis, food poisoning, various skin diseases and severe types of septic shock.

“CLASS A & B Sludge/biosolids Requirements

It is a little EPA joke on farmers and the public.

Since EPA and State regulators want a cheap method of sludge disposal, farmers and the public are not

informed of the potential danger to human and animal health and the lack of enforcement.

EPA admits it did not do a human carcinogen health risk assessment for chemicals, heavy metals or pathogens in sludge biosolids.

"ALL SEWAGE SLUDGE recently tested by the Maine Department of Environmental Protection was contaminated with PFAS chemicals, according to documents obtained by The Intercept. The state tested the sludge, solid waste that remains after the treatment of domestic and industrial water, for the presence of three “forever chemicals”: PFOA, PFOS, and PFBS. Of 44 samples taken from Maine farms and other facilities that distribute compost made from the sludge, all contained at least one of the PFAS chemicals. In all but two of the samples, the chemicals exceeded safety thresholds for sludge..."

"In March, the state announced that it would temporarily halt the land application of sludge and begin the testing, after milk from a dairy farmin Arundel, Maine, was found to be contaminated with PFAS that had likely come from sludge that the farmers had spread on their land as fertilizer..."

“...Even low parts-per-billion levels of PFAS in sludge can threaten the health of the food supply...”https://theintercept.com/2019/06/07/pfas-chemicals...

“…Diet is thought to be a major source of PFAS exposure for Americans. The Environmental Protection Agency has concluded that for the general population “the dominant source of human exposure to PFOS is expected to be from the diet.” The EPA noted that livestock can accumulate PFOS from eating contaminated feed or grazing on fields where biosolids were applied. PFOS also appeared in the majority of fish tested from hundreds of sites across the U.S. …”https://www.ewg.org/news-and-analysis/2019/06/fda-...

8. "Endocrine disruptors and carcinogens in the plastics can leak out and adversely affect soil." https://www.food.news/2019-03-12-microplastics-are...

10. "Pharmaceuticals discharge in the environment via the excretion of pharmaceuticals by humans" http://europa.eu/rapid/press-release_MEMO-19-1598_...

11. "The European Chemicals Agency (ECHA) recently found that concentrated levels of microplastics are more likely to be found in sewage sludge applied as fertiliser than in our oceans." https://greennews.ie/growing-evidence-microplastic...

12. " agency estimates that 43% of microplastics that go down the drain eventually end up applied to agricultural land as biosolids" https://www.endsreport.com/article/1528656/sewage-...

13. "Our analysis determined that the 352 pollutants include 61 designated as acutely hazardous, hazardous or priority pollutants in other programs." https://www.epa.gov/sites/production/files/2018-11...

14. New publication from Germany highlights problems with Antibiotic Resistance and how it relates to Sewage Sludge applied to soils - https://www.umweltbundesamt.de/en/publikationen/an... "

"DEQ finds 20 types of PFAS in compost headed for gardens, farms and playgrounds

Twenty types of perfluorinated compounds, commonly known as PFAS, were detected in compost produced at the McGill facility in Sampson County, but the sources of the contamination have not been identified.

The North Carolina Department of Environmental Quality sampled the compost, as well as wastewater residuals — sludge — from DAK Americas, a plastics manufacturing plant, after a Policy Watch investigation found high levels of a different toxic compound, 1,4-Dioxane, in the sludge entering the McGill facility...

"...Exposure to PFAS has been linked to a variety of health disorders: a depressed immune response, thyroid disease, high cholesterol, high blood pressure during pregnancy — known as preeclampsia — hormonal disruption, developmental problems, and even cancer."

...Golden Heart produces recycled compost using biosolids from wastewater processed by the plant and sells it to farmers and gardeners, officials said...."

We should end the use of all biosolids in agriculture - it is after all merely toxic waste. Here is a PARTIAL list of toxins recently found in sewer sludge applied to land – (thank you Dr. Richard Honour for this list)

This list represents some of the most dangerous contaminants on earth. This should NOT be spread over the countryside under the guise of being a “fertilizer”

They TEST for NONE of these as they DO NOT WANT TO ADMIT THEY EXIST !!

To hear Dr. Honour talk about these and much more check out - "Dr. Richard Honour talks about the many dangers of land-disposed sewage sludge" https://www.brighteon.com/5973823313001...

All the above is NOT COMPREHENSIVE of ALL THE PROVEN SCIENTIFIC FACTS showing the DANGERS of LAND APPLICATION OF TOXIC SEWAGE SLUDGE AKA BIOSOLIDS "BS" CLASS "A OR B"!!