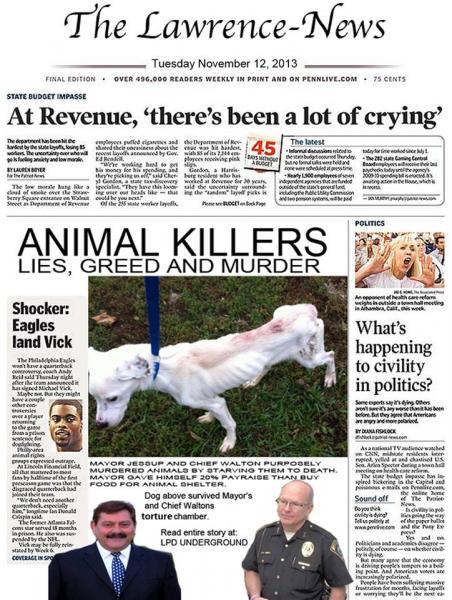 Citizens of Lawrence for the Impeachment of Mayor Dean Jessup

Since elected to office by the citizens of the City of Lawrence, Mayor Dean Jessup has commited numerous unethical and unlawful acts that we find unbecoming of an elected official to serve as the Mayor of our great city. Mayor Jessup knew how the animals at the City of Lawrence animal shelter were being treated and his blantent disregard has caused multiple animal deaths and the shelter to be closed. Mayor Jessup has sold the City of Lawrence sanitation department causing all its workers to be displaced from their jobs just days before Christmas, this after promising the sanitation department would not be sold. Mayor Jessup does not support our police officers or our fire department. Mayor Jessup has taken away benefits for those who helped build this city from nothing. Mayor Jessup has had no accountability for his actions, and we as the citizens of Lawrence, taxpayers, residents, voters, business owners and those who built this city, can no longer sit by and watch as Mayor Jessup destroys everything. This man is very unethical, he is a criminal and he needs to be held accountable for his actions. By signing this, you are agreeing that you would like to see Mayor Dean Jessup stript of his powers and no longer allowed to terrorize and destroy our great city and its residents.