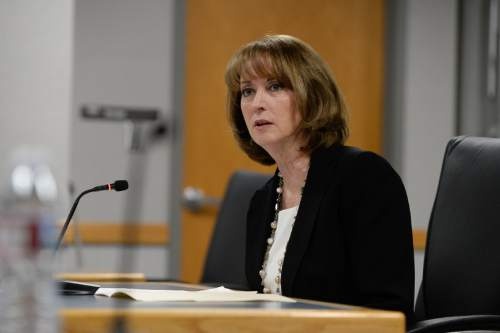 1651 people have signed this petition. Add your name now!

We, the undersigned citizens of the state of Utah, declare our opposition to the politicization of our K-12 schools, our rejection of indoctrination efforts in our schools relating to Covid-19 measures, CRT, and equity initiatives. We demand the removal of Supt. Sydnee Dickson for these failures and for her violation of parental rights through her promotion of policies that clearly violate the Constitution, and Federal and Utah State Laws.

Historically (and wisely), K-12 education environments (schools) have carefully ensured political neutrality, which enables emotional and physical safety for our children, while at the same time being places of great learning and growth. Throughout the past decades, professional standards for teachers upheld and supported schools as politically neutral, safe, nurturing places of academic growth.

The standards ensured that personal political viewpoints are not indoctrinated to the students. Parents have trusted that the schools are neutral places politically, and their children will not be discriminated against based upon their medical conditions or political views (or that of their parents'). This has been America's standard and has allowed us to successfully bring students of all races, ethnicities, religions, medical conditions, gender identities, socioeconomic status', and political persuasions together in a classroom, with the assurance that they will not be discriminated against.

This is no longer the case in Utah schools due to Ms. Dickson's efforts to intentionally politicize our schools through Covid-19 measures and ideologies such as Critical Race Theory. Supt. Dickson has vacated her role as protector and defender of the student and family by directly politicizing our schools to the great harm of our children and families. Under her direction, a Director of Equity position was crated on the USBE staff, and a training called "Equity in Schools" was disseminated state-wide. Additionally, under the "Stay Safe, Stay Home" and "Utah Leads Together" policies, students and families have been harmed. The Covid-19 measures and equity training is filled with political and partisan positions. Utah's classrooms have become powerfully politicized as a direct result of the Superintendent's actions.

Under Ms. Dickson's public service, her staff also disseminated a "model policy" for districts on Gender Inclusion and medical persuasions of Covid-19 measures, of which blatantly violates Utah Code 62A-4a-201 - Rights of Parents and Article III in Utah's Constitution that guarantees freedom from nonsectarian actions and religious discrimination. Also, District personnel are instructed to consult the student to determine if their parents should be notified regarding the student's gender identity and accommodations. Additionally, medical testing, teaching, and enforcement of Covid-19 measures have been a direct trespass on men, women, and children in the state of Utah. These abhorrent policies further evidence Supt. Dickson's gross mismanagement of K-12 schools.

Whether Ms. Dickson is ignorant or willful is unknown and irrelevant. As the leader of public service in the education department of Utah, that impacts over 600,000 children and their families, Ms. Dickson is demonstrably unfit to serve in our educational system due to her violation of Utah law, and her failure to protect Utah schools and Utah children from politicization and indoctrination. She has participated in fictitious laws under color of law that violate U.S. Title 18 241 and 242. Furthermore, Ms. Dickson has not upheld her oath to protect the men, women, and children of this state as declared in our Constitutions, and is therefore in breach of contract. We require the immediate removal of Ms. Dickson.