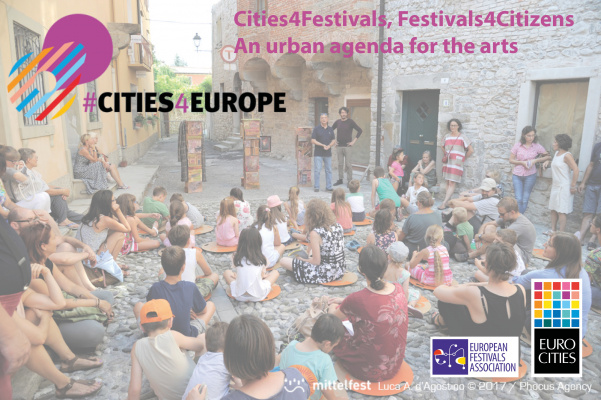 The European Festivals Association and EUROCITIES join forces within the frame of the “Cities4Europe, Europe for Citizens” campaign of EUROCITIES and invite the festivals community and city mayors to become active partners.

The European Festivals Association, speaking on behalf of a constituency of 2650 arts festivals in more than 40 countries, together with EUROCITIES, bringing together the local governments of over 140 of Europe's largest cities and over 45 partner cities across 39 countries, have joined forces to issue this declaration, which highlights the importance of arts and culture in the development of our societies.

Arts are a necessity for every human being. Festivals’ core mission is to bring the arts to audiences. They are among the most effective platforms for encouraging a participatory process between citizens and the arts in a climate of openness and dialogue.

Almost every community celebrates a festival of some kind. As important players in Europe’s Cultural Heritage, today and for the future, arts festivals are deeply rooted in their villages, towns, cities and regions. They belong to the local community but attract visitors from near and far to enjoy a festive moment together.

In times when cities are becoming increasingly important in Europe, not only politically, but as hosts of our diverse communities, we believe that the contribution of the arts and arts festivals to open and harmonious living-together is immense.

Festivals and cities need to embark on a journey to develop and profile their neighbourhoods as innovative, striving and forward-looking places of discovery, as well as being the storehouses of cultural memory.

We call on all cities, city networks, regions, and festivals to participate in this commitment.