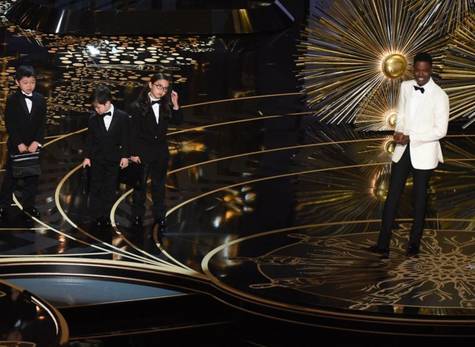 Chris Rock and Oscar to apologize for crude Asian jokes.

We are writing to you because you have done the Asian American community a great disservice when you brought 3 children of Asian descent on the Oscar stage only to ridicule them for their skin color. We know that comedians have to cross lines to make people laugh. We know that in many ways you do not truly mean to deal the offense that you have dealt and you may not have been aware of the very solid morale line that you have crossed. However you have dealt your insults and you have crossed that line. People of America demand an apology from you for dragging innocent onto an international television event only to mock them for their racial identity.

The asian American community deserves an apology from you. If you truly want to promote diversity, you will deliver us a public apology.

The Oscar award of 2016 hosted by Chris Rock proves that racism still very much exists. Ironically Rock proved that it does very much for Asian Americans. I have sat idly by through many years as American television and movies are littered with racist Asian American tropes. I did nothing as we are displayed on screen as a stereotype and rarely as human beings. But as I watch this joke of an award ceremony employed Asian stereotypes as comic relief on a night that they claim to be promoting diversity, I knew that it was time to stand up and do something about it.

In a segment where Chris Rock talked about accountants, he brought 3 adorable little Asian children on stage while introducing them as “Ming Zhu, Bao Ling, and David Moskowitz”. They employed the stereotype that Asian’s are good at math and even throw in half a Jewish stereotype on 3 little children. As the audience stayed silent not knowing what to make of this crude joke, Rock added “If anybody's upset about that joke, just tweet about it on your phone...that was also made by these kids.”

Let’s ignore for a moment that this joke marginalizes child labor and the conditions of poverty in areas of China, the fact that he brings 3 children on stage to make fun of their racial background is unacceptable. This is the worst Asian American racism I have ever seen in my life because these were children. Children are not to be brought on stage to be mocked. And the fact that Rock used stereotypes for this jokes means that this children were brought on stage to be mocked for their ethnicity. Utterly unacceptable.

Why is this acceptable on a national stage? Why? The fact that there isn’t a bigger outrage is itself an outrage. We have been silent every single time stereotypes are used against us and we have let the world think that we can be kicked around and so they do. They now bring our children on stage as props. Why wouldn’t they, when we never speak up?

Asian Americans have been silent or ignored about so much that is happening in this country and is time to speak up. We stayed silent as Asian American students have a tougher time applying to colleges because there is a “quota” for us. We stayed silent as the entertainment industry under-represents us in movies and have no reserve employing offensive Asian stereotypes. But will we stay silent when our children are being laughed at on national TV? Can we afford to? How do you know that it will not be your family or your loved ones that will be ridiculed next on a national level?

I have made a petition here together to ask Chris Rock and the Oscars to apologize for the crude jokes made against Asian Americans. This is the first step to building a fairer better future for all Asian Americans. Asian Americans need to speak up and take a stand, or risk seeing this marginalization turn into something uglier. I hope you will give your support in this.