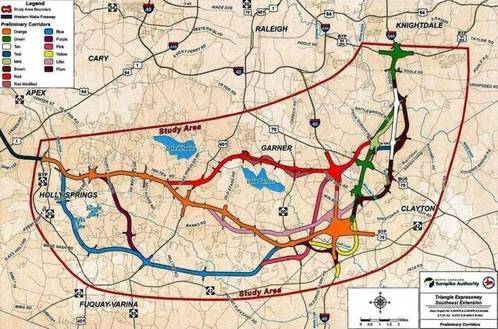 Choose The Orange Route. No Purple-Blue 0

Choose The Orange Route. No Purple-Blue 0 Comments
250 signers. Almost there! Add your voice!
95%

The North Carolina Department of Transportation (NCDOT) is close to making a decision on a preferred route for the Triangle Expressway Southeast Extension (I-540).

In 1996, in accordance with the NC Transportation Corridor Official Map Act, NCDOT established a protected corridor (the Orange route) for the portion of 540 between N.C. 55 Bypass in Apex and I-40 near the Johnston/Wake County line. This protected corridor preserves the location of a new road from encroaching development.

The alternative Purple-Blue route that is under consideration goes against all of the planning and decisions that have been made in this area of the County for the past 20 years.

Holly Springs, Apex, Cary, Garner, Raleigh, Fuquay-Varina and Wake County have made key planning decisions for both existing and future development based upon I-540. These decisions have required developers and builders to plan their residential and commercial development outside of the protected Orange route in order to have a well thought out and harmonious community that would be able to appropriately co-exist with the I-504 expressway.

The Purple-Blue route is the most expensive to build and displaces the most homes, residents and businesses by almost double in comparison to the Orange Route. The Purple-Blue route also has significant negative environmental impacts of its own, including a major impact on streams in the area, our main flood plain and several major habitats including the Blue Pond Salamander site and other rare aquatic species in the Middle Creek area and would run through two planned parks in the area.

We, the undersigned, call on the North Carolina Department of Transportation to build I-540 along the original protected corridor known as the Orange route, and remove the Purple-Blue route from any further consideration.