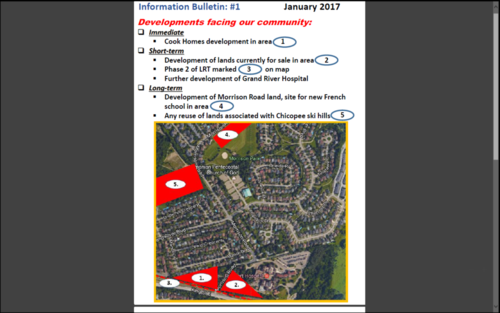 Details
-Total site area 1.46 hectares but 1.44 hectares after Morrison Road widening
- 3 story, high density housing
- Number of units, 68
- Required floor space ratio is 0.6, proposed ratio is 0.56 which is lower than regulation and 7% overbuild i.e. 68 units should be 63 units
- The development is completely out of character with the detached

Traffic
- The 68 housing units will result in 1.5 to 2.0 vehicles per unit or 102 –136 vehicles
- Other additional traffic will take the form of visitors and services such as lawn care, snow removal and garbage removal etc.
- The proposed entrance is off Morrison
- Left hand turns onto King are currently troublesome, a significant percentage of new households will exit using Manor Drive and/or Grand River Boulevard

Environmental
- Significant tree removal was carried out without the required permit
- The land was previously legally used for manufacturing commercial signs using an array of chemicals i.e. paints, solvents etc.
- The older house on the site is the original area farmhouse and could have ground issues vis-à-vis the use of chemicals and oils associated with farm machinery etc.
- The City has not requested an Environmental Study Plan for the site
- Additionally the houses to be demolished may have asbestos and mold

Phase 2 LRT
The Phase 2 extension of the LRT to Cambridge will use the existing CP line along King Street which will mean…….
- Traffic flow changes due to a right-turn only junction at Morrison/King, this will push all left hand turning traffic onto Manor and/or Grand River
- The main entrance to Grand River Hospital could become a right-turn only junction too, resulting in all left-hand hospital traffic using Manor and/or Grand - River to reach the Morrison Road hospital entrance
- The Morrison-King junction could be completely closed in the future

By working together and becoming involved, we can influence development decisions in our community