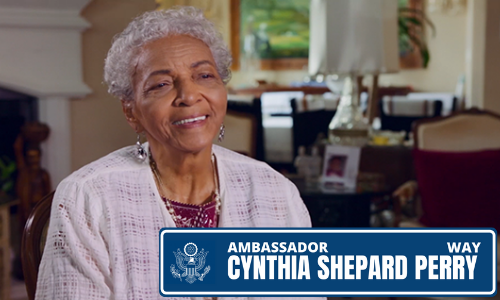 An ISU Alumni Committee is Petitioning a Street Name Change for fellow Alumna in Terre Haute, IN

iPetitions hosts thousands of petitions for free. You will be asked to consider making a contribution but for this iPetition, you are not requred.

Dr. Cynthia Shepard Perry served our country with distinction as Ambassador to Sierra Leone from 1986-1989 and as Ambassador to the Republic of Burundi from 1989-1993. The first woman doctoral recipient of the College of Education's International Education program (1972), she has been honored at UMass Amherst with an honorary Doctor of Public Service (1988) and a Distinguished Alumni Award (2002).

Born in 1928 in Lost Creek, Dr. Perry earned a bachelor's degree at Indiana State University in 1967. Dr. Perry's first trip to Africa was in 1968 as leader of a team of students from Colby Women's College (New Hampshire) to conduct a secretarial training project at the University of Nairobi, funded by Crossroads Africa. From 1971-1973, she trained a Peace Corps volunteer group at Texas Southern University to serve in Sierra Leone. In 1974, she led a special educational delegation to Sierra Leone, Ghana, Nigeria, and Liberia. From 1973-1976, she trained Peace Corps paramedical volunteers in Kenya, lectured at the University of Nairobi, and served as consultant to the U.S. Information Service in Kenya, Nigeria, and Zambia. In 1976, she was appointed Staff Development Officer at the U.N. Economic Commission for Africa in Addis Ababa. Having joined the Texas Southern University faculty in 1971, she served as an Associate Professor and Associate Director of Teacher Corps/Peace Corps, later becoming a full Professor and Dean of International Affairs from 1978-1982. In 1982, the Reagan Administration appointed Dr. Shepard Perry to be Chief of the Education and Human Resources Division in the Africa Bureau of the U.S. Agency for International Development (USAID), where she remained until 1986.

In 1986, Dr. Perry was appointed Ambassador to Sierra Leone by President Ronald Reagan, serving in that role with notable success despite political and social tensions that later erupted in civil war. In 1989, President George H. Bush again called upon her expertise and asked Dr. Shepard Perry to serve as Ambassador to Burundi. In both roles, she worked with keen intelligence to increase the United State's stature and navigate relations with diplomacy and tact.

In 1996, President George W. Bush appointed Dr. Shepard Perry as Regent of Texas Woman's University, where she served until 2001 when he appointed her to be U.S. Executive Director of the African Development Bank in Abidjan, and later Tunisia. After she retired from this post in 2007, she returned to Houston, where she currently serves as Honorary Consul General of Rwanda, appointed by President Kagame, and confirmed by the U.S. Dept. of State as an honorary position.

In addition to being honored as a Distinguished Alumni, Dr. Shepard Perry has left a positive legacy of change not only in the State of Indiana or the United States but across the world. Help us rename 5TH STREET north from WABASH AVENUE downtown to AMBASSADOR. CYNTHIA SHEPARD PERRY WAY extending through Indiana State University's campus ending at TIPPECANOE STREET in her honor.