As a die hard Chelsea FC fan, I have ONE simple new year resolution / request from Roman Abramovich and Chelsea management. 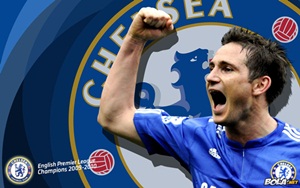 Please keep Frank Lampard at Chelsea for at least ONE more season at all costs. The reasons are very simple to see actually, but here are TEN of them;
1. As we can see, from the recent games, Lampard still scores good goals and is instrumental to the team. AND IS NOW THE HIGHEST GOAL SCORER IN THE CLUBS HISTORY!!!!
2. Until we find a lasting solution to Torres not firing on all cylinders, we need the midfield to step up and that includes Lampard.
3. Chelsea is lacking a leader, but not when Lamps is in the team!
4. Obviously even though Lamps can't play every game, which I think he knows, if he can be convinced to start some games in the bench, he is still a terrific and valuable player!
5. On the business side, keeping the Lamps hopefully with a reduced weekly wage will still cost less than some of the new players to be brought in by spending anywhere from $45 - $60 million on one player. We are very much aware that money is not the clubs problem, but getting in line with UEFA regulations. Besides, Lamps merchandise is likely to continue to sell like crazy.
6. Lampard has been a committed Chelsea player and deserve to have the team stand by them, especially if they are playing well and more importantly want to stay with the club.
7. When (not if) we pick up a couple of new strikers after the season, we will still need some members of the old guard in the team. If Lamps leaves, we will only have JT (for how long??) from the old guard.
8. We always chase so many trophies and we need a really good and large squad! FA Cup, League Cup, Europa Cup and of course the premiership!
9. A pay cut can be part of the deal, but, finally Chelsea is Lampard and Lampard is Chelsea. Please do not let Chelsea leave Chelsea! Lamps should really be retiring from Chelsea!
10. Let Lamps extend his NEW club goal scoring record at the club, and set a benchmark for those to follow in the years to come.
Blues fans, we need to gather as many signatures and send this somehow to Roman before the he is sold in the January window!!!!
Please sign the petition if you love the Blues and love Lampard. Distribute the link to this petition on your Facebook page, Twitter and more!  Also use the links below to go to the Chelsea website and contact the team directly!