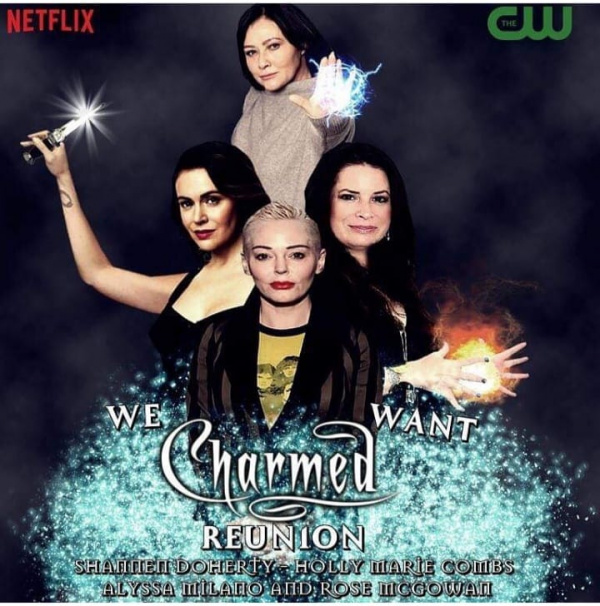 84264 people have signed this petition. Add your name now!

Help the ORIGINAL Charmed cast and characters to COME BACK!

Please join this #Revival petition to request the original cast in an upcoming Charmed Project.

The Petition's goal is to grab the attention of Netflix and CBS television studios. So they would notice the many Charmed fans, around the world, who would like their favourite show to return with the original cast for a reunion. Since the series's finale on 2006, fans were eager to have more episodes. All the cast members said they would like to come back. However, CBS Studios have the rights for the show now and they are more interested in rebooting the series without them, which all the fans are against it. Please Netflix and CBS, discuss reviving Charmed with its original characters. Take for example the many shows that had recently been revived with their original cast (Gilmore Girls, X-files, Fuller House, Arrested Development, Raven's home, Prison Break, Twin Peaks, Will and Grace, etc). Charmed fans would truly appreciate a revival as well, it would really make many people's dreams come true.

The show was about the Halliwell sisters and their characters development, and anything that would change that will not be true to the series. CBS Television Studios and The CW network should learn about what make Charmed so successful before they decide to make a show about new witches! The Halliwell sisters are the reason behind the show's success, and they are irreplaceable; If you remove them from the story then whatever made the show good would be missing. That is the reason why a reboot, without the original Charmed ones to make an appearance nor even a connection, is more likely to fail. Ever since Charmed ended every new show, about Witches who fight evil, failed and got cancelled. (Eastwick "ABC", The Secret Circle, and Witches of East End "Lifetime"). This should prove that what the audience want to watch is more episodes from the Original Charmed. The majority of people and loyal fans don't want to see a show that wants to copy their beloved series. So CW and CBS, good luck with your Charmed reboot but we'll always keep petitioning for the ORIGINAL Charmed. Also Prue Halliwell played by Shannen Doherty was the main ''Lead" in the first 3 seasons of the show, but she was killed off and we never got a real ending for her character. The only way to honour the original show is by following its storyline, not erasing it.

This is the perfect time for us Charmed fans to petition for a Charmed Revival. With all the reboots that are going around, we might be able to convince Netflix to revive Charmed. Netflix's shows get released on DVD, and other streaming websites. They revived few 90s' shows like Gilmore Girls, Fuller House, Arrested Development (and brought back ALL of the shows' ORIGINAL cast.) We need their help to stop CBS Studios from remaking the series, so we can get our original cast back for a reunion mini-series or even a spin-off. If we gathered many signatures we can grab Netflix's attention and they would be able to change CBS's plan. We have to let the world know that we need a sequel for our favourite witches and the Halliwell family.

The original Charmed ones are the show and without them, it's going to fail. Their hearts, souls, and dedication is what made Charmed extraordinary. Respect the fans' wishes and honour the past, Jennie Snyder Urman and The CW. Loyal fans would rather watch the original show a hundred times than watch a remake.

Three sisters who happened to be witches is the true power behind Charmed that no Witch show ever had. The Cast and Characters were EVERYTHING that the audience wanted.

“Charmed has sustained itself for over a decade, which I don’t think anyone expected, even though it makes perfect sense. It’s a timeless show about family, sisters and magic. Our daily mantra was: ‘This is a show about three sisters who happen to be witches, not three witches who happen to be sisters.” (Brad Kern, Charmed show-runner, TVLine 2016)

Fans weren't going to be upset if CBS Television Studios made a sequel or some connection to the original Halliwell sisters instead of trying to replace them with a remake. The original charmed fans don't have a closure with the new charmed remake because they wanted to see the future of the charmed ones' offsprings and grand children for the series to be called charmed instead of just using the title just for the new show to get popular and take advantage of how successful the original show. Also people wouldn't have compared the two shows so much all the time because it would've been related to the original just like when Prue died and they continued the show with a new sister but it was still charmed and true to the series. That is why it is believed that CBS studios screwed over the loyal original fans when they decided to remake the series and have nothing to do with the original. And that is why the remake will never be as successful as the original. People will always want the Halliwells back.

There are many Charmed fans around the world who love this phenomenal show, so we must have the power to bring it back. All we have to do is to unite!

~ Charmed belongs to the original cast ~

- The Petition Picture was made by Vaggelis Dimopoulos‎