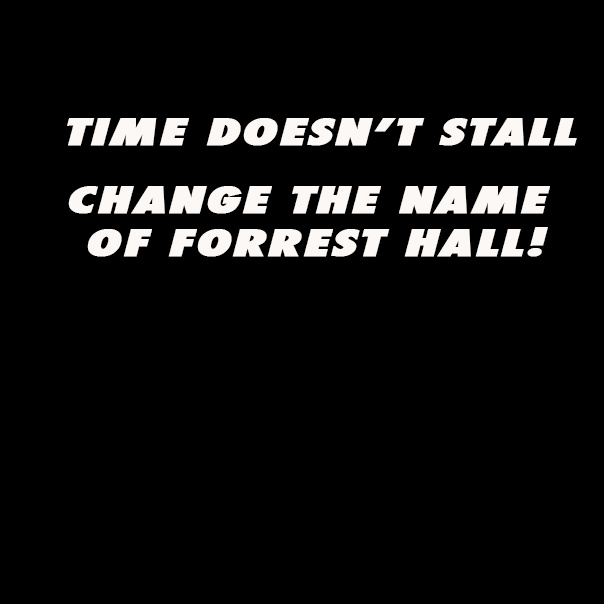 Change The Name Of Forrest Hall 0

Change The Name Of Forrest Hall 0 Comments
570 people have signed. Add your voice!
57%

Nathan Bedford Forrest was a lieutenant general in the Confederate Army, and was the 1st Grand Wizard of the Klu Klux Klan. There are some apologists who argue that when the Klan started to become violent, Nathan Bedford Forrest distanced himself from the Klan. This image can easily be debunked, using the writings of the acclaimed historical non-fiction writer Andrew Ward: "In the spring of 1867, Forrest and his dragoons launched a campaign of midnight parades; 'ghost' masquerades; and 'whipping' and even 'killing Negro voters and white Republicans, to scare blacks off voting and running for office." The ROTC building on MTSU's campus (Forrest Hall) is named after him. There is no reason or explanation on why MTSU continues to honor this man that is in any way justifiable. Help us to ensure that the memory of this hateful man be washed off of MTSU's Campus.

We call on President Sidney A. McPhee, the State Legislature, the Board Of Regents, the SGA, and the Department of the Army to support our campaign and help to promote true diversity on MTSU's campus.

For any group interested in sponsoring our campaign,which is an extension Black Lives Matter, please contact us at the following email: changeforresthall@gmail.com