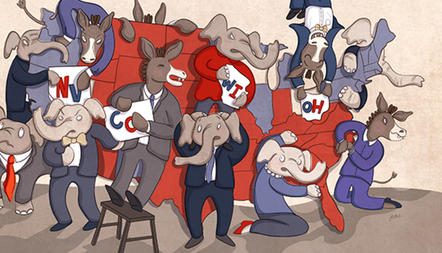 The Electoral College should be retired from our political system, because in this day in age it serves no purpose and only hurts the rights of the people of America.

In 1787, our brilliant founding fathers created a system to elect the president which made sense but also was the best way they could do it. But now 200 years later, the system is outdated and the reasons they based it on are only hurting the people of America. We have several reasons and have the incentive to improve our government and make the voices heard who have been trying to get rid of this faulty system. Our government is based off of popular sovereignty which means the people have the power. But the electoral college ruins that, for example more people voted for Al Gore in the 2000 election but because of the electoral college a president was elected who the people didn’t want. In a world where we strive for freedom especially in the united states, to use a system such as the electoral college rids us of our right to vote. Those who support the electoral college believe it recognizes a role for states in the selection of the president, however, the Electoral College should be retired from our political system, because in this day in age it serves no purpose and only hurts the rights of the people of America.

The system was originally created because Americans weren't educated enough on the candidates to make decisions on them. Now, however, Americans have tons of access for all kinds of information. The Electoral College is the voting method that the United States has been using since the year 1787. In the electoral college, the people of the states elect a representative who in turn votes for the leader that the representative wants, not who you want. Also depending on population, and which state you live, a state gets a certain amount of electoral votes. Finally the candidate who receives the most electoral votes wins the presidency. According to Eric Black, “It creates the possibility for the loser of the popular vote to win the electoral vote.” This means that if you vote for a candidate that you want to be president and the majority of the people in the nation wants the same candidate, there is still a chance that your candidate won't be president.You, the Americans are smarter than this. Don’t let them control you.

As of right now, in this system the President represents the states more than the people he's actually supposed to serve. The electoral college system makes it so that the votes put forth by the people are almost pointless. Although, the votes can sway a state to a certain candidate, it's the state's final decision no matter what the people say. Also the electoral college members have voted in the past for another candidate that was not of the states choosing. According to Michael A. Ventrella, “Right now, a President can lose the election and still win. That has happened three times in our history, most recently when Gore got more popular votes than Bush yet Bush won the electoral college. We ended up with a guy a majority of Americans voted against. How is that democracy? That’s winning by a loophole. And it could easily happen again.” If your vote doesn't really matter, why vote at all? You do have the right to vote but with the Electoral College, that right is diminished. This system ruins the democracy that this nation has lived on for so long. It is not right. The Electoral college is not right.

Supporters of the Electoral College feel that the system requires a presidential candidate to have transregional appeal. No region of the United States has enough electoral votes to elect a president on their own. Which forces the candidate to try and appeal and reach out to as many regions and states as possible. According to Richard A. Posner, This is a desirable result because a candidate with only regional appeal is unlikely to be a successful president. The residents of the other regions are likely to feel disfranchised. With information like this suggesting the system requires a candidate to have transregional appeal, the Electoral College seems like a good option; However, the electoral college creates creates a states that have established parties. According to Michael A. Ventrella, “This concept of “blue states”and “red states”does nothing to help political discourse, and only divides us more.” Because the Electoral college system, not only do your votes in certain states not matter at all, we are divided further as a nation with political parties. If you live in state with an established party that is not of your own, your vote will not matter because the state will already be voting for the other party. As a nation we are already divided on our opinions, to the point that sometimes we can’t compromise and the electoral college further sets apart. Because it creates Republican and Democratic states. The electoral college divides us, but also makes some of our votes absolutely pointless.