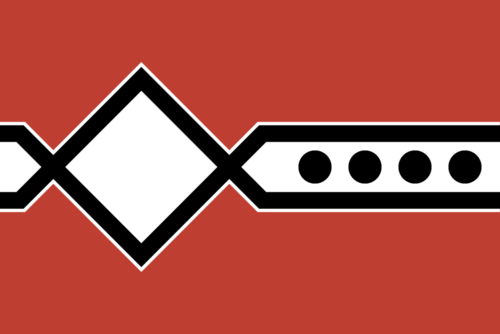 The flag of Mars designed by Pascal Lee is:

1. Quite unaesthetic, which is completely opposite of how a flag should be.

2. It is a tricolor, like 1 in every 3 flags. A flag that represents a planet should be unique.

3. It is based on a book series, and therefore is lacking originality in my opinion.

4. The lone thing it symbolizes is not Mars itself, but its terraformation, a process that may never take place.

Therefore, one I have designed my own version.

The drop on one line and the rise on the other represent the largest canyon and the highest mountain in the solar system, both on Mars.

The white in the square is the new page mars is to humanity, and could also be the sun that looks white on mars.

The four dots then represent the planet's position in the Solar System: Mercury, Venus, Earth and then Mars.

The black separating the two halves of the flag is the space that separates Earth and Mars, and the inner white is the spacecraft that will get us there.

The red background represents the surface of Mars.

This petition will, once reaching a certain amount of signatures, be sent to various space-faring entities which are not restricted by the International Space Treaty, such as the Planetary Society and the Mars Society.

Please take a moment to share this petition with your friends.