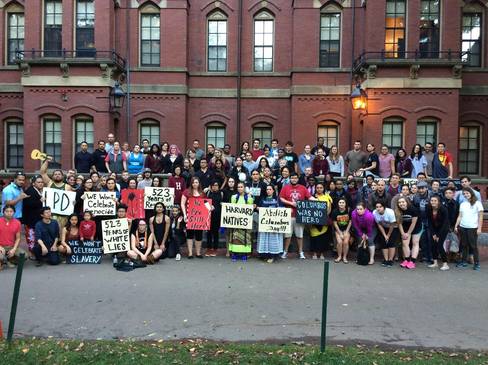 This letter is a demand to the Harvard administration to officially rename Columbus Day to Indigenous Peoples Day. Harvard students, faculty, alumni, and associates believe the time has come to envision a future where indigenous peoples’ experiences are valued and respected.

____
In 1492, Christopher Columbus arrived to the coasts of Hispaniola seeking information to one simple question: “Where is the gold”?

In his personal journal, Columbus wrote: “They [Arawaks and Tainos] should be good servants .... I, our Lord being pleased, will take hence, at the time of my departure, six natives for your Highnesses." A few years later, a dozen or more captives were paraded as exotic breeds through the streets of Barcelona and Sevilla. Starting in 1450, one of the world’s largest and longest period of slavery was about to begin. Tainos and Arawaks became bodies of experimentation to the new slave economy that was to dominate America’s culture and politics for more than three hundred years, first with the massive colonization of indigenous peoples in the Americas, and later with the arrival of the first African slave ship in 1562.

Throughout the Americas, from northern Mexico to western Bolivia, slavery became the basis of economic development through the system of Encomienda whereby families and/or groups of indigenous communities were forcefully regulated under one Spanish master to work long hours in conglomerated spaces and extremely exploitative situations. Any native that was fourteen years of age and above was forcefully ordered to collect gold resulting in violent rebellions, collective suicides, and the rapid spread of diseases through sexual abuse and incarceration. By 1515 more than half of the Caribbean native population had perished.

According to historian Basil Davison, Columbus was also key in initiating the Transatlantic African slave trade, with the first license granted to enslave Africans as ordered by the king and queen of Spain in 1505 was led during Columbus’ governmental rule in the Indies. While the numbers are still contested, over 12 million African indigenous people died during the Slave Transatlantic period. Approximately 80 million Native Americans died and/or were killed in one hundred years after Columbus’ intricate slave system.

A number of indigenous peoples and others have raised concerns over the celebration of Christopher Columbus as federal holiday. In 1977, the UN’s International Conference on Discrimination Against Indigenous Populations in the Americas declared Columbus Day will be be replaced by Indigenous Peoples Day. In 1992, a number of Native and African American intellectuals, politicians, and activists convinced the city of Berkeley to rename their holiday to “Indigenous Peoples Day,” encouraging others states, cities, universities, tribal governments, and institutions across the Americas to rename this controversial holiday. Some examples include Portland, OR; Albuquerque, NM; Olympia, WA; Seattle, WA, and several others.
Millions of Americans have ceased to celebrate “Columbus Day” in favor of recognizing indigenous peoples’ contributions to every facet of American life.

The time has come for Harvard’s administration to reconsider Christopher Columbus Day as an official school holiday. Numerous students from all parts of the world have joined Native American and African American students on campus to reimagine more accurate and respectful narratives of history, where indigenous peoples’ way of life is celebrated and acknowledged. We believe historical knowledge can help us attain a better understanding of the heroes we now celebrate for their audacity, perseverance, and contribution to humanity. We believe Columbus does not represent Harvard’s “values of respect, dignity, and difference” among others and each other. Together we can forge new ways of celebrating our communities that include, not exclude, the diverse body of Harvard college and graduate students.

This letters is a demand to the Harvard administration to officially rename Columbus Day to Indigenous People’s Day. The time has come.

With deep respect and sincerity to all,