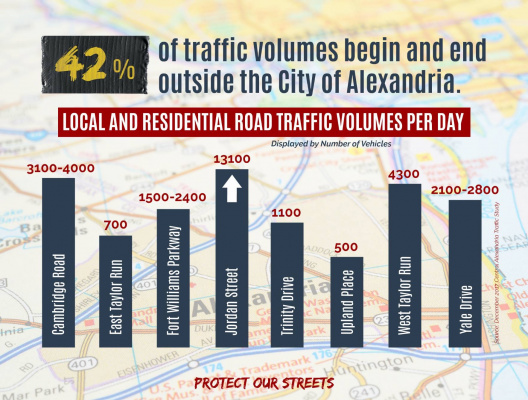 In Central Alexandria and the West End of Alexandria, increased traffic volumes and congestion have led to (1) a significant increase in dangerous cut-through traffic on secondary roads and neighborhood streets and, (2) longer travel time and decreased mobility for residents.

This situation has been exacerbated by Complete Streets road diets and/or the drastic reduction of speed limits on our major arteries, including King Street, Quaker Lane, Seminary Road, and Van Dorn Street.

Alexandria’s Transportation & Environmental Services Department (T&ES) has proposed three alternatives for redesign of Seminary Road and has assigned the highest rating to Alternative 3, which would narrow Seminary Road from four vehicular lanes to three, often called a 4-to-3 road diet.

Alternative 3 calls for one vehicular lane in each direction and one turn lane running down the middle of the road. Alternative 3 also calls for the installation of bike lanes.

Therefore, we the undersigned respectfully request that:

• The Traffic & Parking Board reject any recommendation from T&ES or any other party that proposes reducing the number of motor vehicle lanes on Seminary Road between Howard Road and Quaker Lane.

• The Alexandria City Council to take up this matter in regular council session should the Traffic & Parking Board approve Alternative 3 or any other recommendation for reducing vehicular lanes or installing bicycle lanes on Seminary Lane between Howard Road and Quaker Lane.

• That Council Members vote against any such recommendation from the Traffic & Parking Board if the matter is brought before City Council.