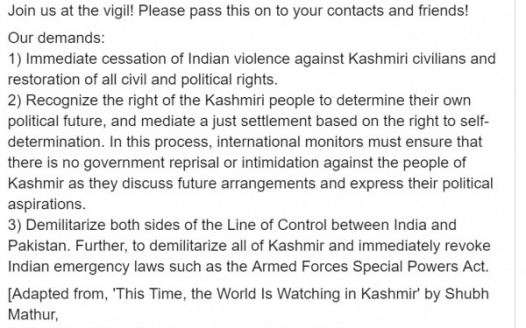 Overseas Friends of India, Ireland calls upon the Embassy of India, Dublin to cease all support to Ireland India Institute, a body set to highlight the achievements of "contemporary" India in which they have failed miserably and funded by Dublin City University over their very irresponsible post on Facebook dated 30th August asking followers, friends and members to take part in a candle vigil at the GPO against the Indian authorities.

We wish to highlight that in 2016 after the death of Burhan Wani, commander of Kashmiri militant and separatist group Hizbul Mujahideen who gained popularity via social media, it took 3 months to restore normalcy in the state leading to multiple casualties and innocent lives being lost, the curfew in state of Jammu & Kashmir was put in place to not allow history repeat itself.

The Supreme Court of India has informed the citizens that restrictions will be lifted in a phased manner and said that the situation should be allowed to return to normal on its own. We now must trust in our Government, highest court & the Constitution of India that peace and justice will prevail.

However, Ireland India Institute's statement in relation to not only organising a provocative event but putting India under a negative limelight cannot be accepted by the community.

We, the children of India do not appreciate Ireland India Institute as representatives of India and urge the Embassy to pull back all support.