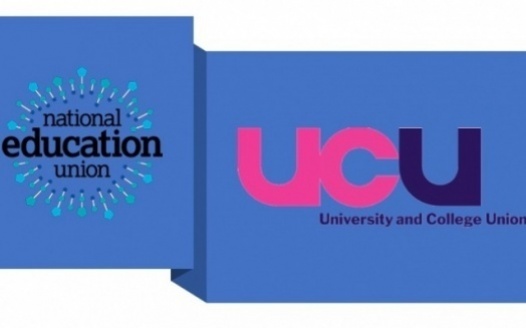 Three years ago, after our last strike, UCU wrote this,

‘It’s been a breath of fresh air working with the new CEO who has a very different approach to industrial relations and a very clear and optimistic vision about how the group can go forward both financially and educationally.’

We bought into and were excited by this new vision.

The CEO rightly prided himself on his ability to bring people together, and was recruited as the CEO on the basis of being able to do so.

Three years on and we are going through the longest industrial action the group, indeed any of the colleges, have ever undertaken.

Alastair in a letter to staff, celebrating the pay award three years ago, stated, ‘There has been much talk in the sector and the media about pay gaps between different groups, including organisations’ executives and their staff’

Sadly, the pay gap is still as wide as ever.

Is it really beyond the capacity of the Board, the CEO and your senior management to be able to reach an agreement with UCU/NEU negotiators, who represent the views of the vast majority of teaching staff, so that we can all celebrate as we did three years ago?

The three elements of our claim are modest ones. Pay, as you both have stated many times before is a real problem within the sector. Yes, this is due to lack of government funding, but CCCG is not a financially poor organisation.

We have also just heard that the Marlborough Building (alongside others) have been placed on the market. This is a decision that the unions don’t support and we are dismayed this has not been discussed with staff to seek their views on this issue. If it goes ahead, millions of pounds will be brought into the organisation. Your stated aim for closing the Marlborough building, temporarily, was to save money which could be ringfenced for a pay award.

At the heart of this dispute lies the desire for staff to be professionally respected.

Your own staff survey results revealed how low morale is at the college. The results show that CCCG compared to 48 colleges were “below average in all categories” and “near the bottom in most”. We can’t simply sweep these results under the carpet as if they were never recorded.

Workload intensification and the TLADP are issues that you and your senior management could do something about immediately to begin to demonstrate that the leadership of the group are genuine about wanting to bring back a sense of professional respect. Imposing a TLADP on staff that will see them observed every three weeks is not a sign that the leadership respect or trust staff.

According to your own figures (taken from the board minutes), 86% of teaching staff out of 900 are rated as good or better. This means that only 14% of lecturers, judged on your assessments, are considered to 'require improvement'. Again, according to the report to the governing board, the existing college protocols and policies are already supporting these staff to help them improve. These measures only need to improve one in three of those being supported to move from ‘needs improvement’ to good or better in order to meet the ‘no more than 10%’ Ofsted requirements you are targeting.

So why does the board and senior management insist on such extreme monitoring polices and stubbornly refuse to consider alternative polices that could unite teachers and their managers with the senior leadership team and the board?

Refusing to seek a policy that can do this will deepen divisions, raise staff and student anxiety and stress, risk significant reputational damage to the group (who would want to apply for a job at CCCG with this policy?) and lead to the complete evaporation of goodwill.

All of this with an Ofsted inspection imminent.

With so much at stake, staff do not understand why our CEO has not been present at any of the negotiations to use his skills to bring the two sides together.

We call upon you to:

· Reopen negotiations with UCU/NEU to reach an agreement that everyone can celebrate to avoid further disruption.

· As the person ultimately responsible for the running of the college we call upon the CEO to personally attend and supervise these negotiations.