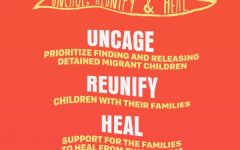 Caravan for the Children: Uncage, ReUnify and Heal

Caravan for the Children Launches Phase II of its Campaign

On March 25, the Caravan launches Phase II of its campaign to Uncage, Reunify and Heal the children.

As of today, more two thousand children remain separated from their families after the current administration campaigned to prioritize their reunification. Over a year has passed, and only 100 children have been reunited. As a community that values family and understands the devastating impact this separation has on children. Along with the understanding of its as a racist and historical practice used to found this country, starting with separating black children from their parents during slavery, the Caravan knew its work was not over. We knew we must act!

On May 1st, 2022, a delegation of Caravan organizers will, once again, go to Washington, DC and bring the local postcards and online petition to the doors of the President’s Interagency Task Force on the Reunification of Families. We want to flex our collective political muscle and let the administration know the effort to Uncage, Reunify and Heal has broad support in the Latinx community and well beyond.

Let President Biden know we won’t let these children and families be forgotten!

Please click on the link, sign the petition, and send it to 20 of your family members, coworkers, and friends.

PHASE I of Campaign

Caravan for the Children is a campaign to Uncage, ReUnify and Heal the children impacted by family separation due to Trump's Zero Tolerance policy. We call on the Biden-Harris administration to take action on this matter within their first 100 days. However, we need to show that our support extends within and beyond our own community. That’s where you come in. If you believe in basic human right and that families belong together then we hope you are among those that find the idea of caged children separated from their families as reprehensible as we do. If you do, we have one simple request: SIGN THIS PETITION to show your support!

This is a national 100-day effort to demand the release, reunification, and healing of migrant children still being held in ICE custody across the country. Organizers seek to hold all elected officials accountable to the Biden Immigration Plan.

The goals of the Caravan for the Children Campaign are:

How to Get Involved with the Caravan for the Children Campaign:

Immigrant children continue to be detained by ICE in “tent camps” where they receive insufficient nutrition, no hot meals, lack medical care, nor opportunities to bathe, learn and play. At least six children that we know of have died while living in these conditions. Many clinicians agree that the effects of parental separation and subsequent living conditions have resulted in significant trauma that may last their entire lifetimes. By signing, you will add your name to the call to stop this practice and prioritize the release of the children within the first 100 days of the Biden-Harris administration. We know they will not act unless they feel the pressure of the people. Please sign today!

This campaign is being organized by a collaborative of volunteer organizations: