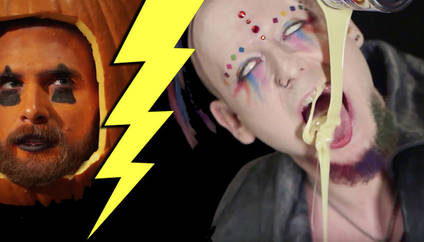 Get HOW TO 'Candied Cornhole' on MUNCHIES for Halloween!!!

Justin Symbol's 'HOW TO Candied Cornhole' is a Halloween cult food sensation destined for stardom.

Filmed last year, and co-starring MUNCHIES production coordinator Peter Courtien, it was planned to be the Halloween special for the VICE Munchies vertical. However the "powers that be" panicked at the last minute, calling the piece "too gross".

Many people including VICE employees have since viewed the piece and called it a "revelation", expressing disappointment that it was never aired. Now is our chance to right the wrongs and convince the MUNCHES team that this brilliant piece deserves its rightful place as the MUNCHIES Halloween special of 2016!!!

“Birds born in a cage think flying is an illness.”