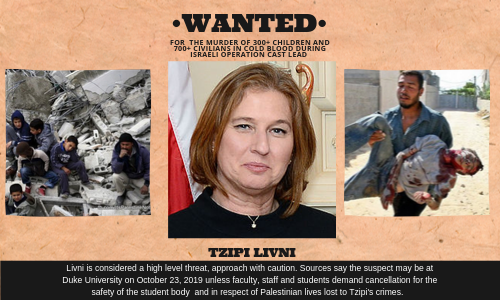 Can't Learn about Justice from a War Criminal

533 people have signed this petition. Add your name now!

Duke University is slated to host former Israeli Foreign Minister Tzipi Livni for a talk on October 23rd, 2019, despite presumably being aware she has faced multiple accusations of war crimes and arrest warrants for her actions in office. Livni’s crimes are no secret: in December of 2008, the Israeli government launched a military offensive called Operation Cast Lead, unilaterally breaking a ceasefire it held with the Gaza Strip. The operation, which included aerial bombardments, a naval siege, and a ground invasion, killed nearly 1,500 Palestinians, most of them civilians, including over 300 children, injured over 5,000 people, and left 20,000 people displaced in the Gaza Strip as the Israeli military illegally targeted roughly 3,500 civilian homes. Tzipi Livni “played a key role in the decisions made before and during the three-week offensive” as Israel’s Foreign Minister and a member of the Prime Minister Ehud Olmert’s security cabinet.

In the wake of this international disaster, the worst in the six decade long-span of the Palestinian occupation, Livni brazenly boasted of her responsibility for the violence, declaring “Israel demonstrated real hooliganism during the course of the recent operation, which I demanded.” The international community, however, has charged this “hooliganism” as constituting war crimes and violations of the Geneva Conventions. Livni has had articles of arrest drawn against her for these crimes on five separate occasions in Belgium, Switzerland, and the United Kingdom, but has yet to face trial, partly by cowardly canceling trips to evade facing legal procedures.

While Livni may continue to evade justice in the international courts, the court of public opinion must resolutely rule in favor of her victims. Among other lofty ideals, Duke University purports to instill its students with “high ethical standards” and the Office of the President claims to encourage “holding individuals and organizations accountable for their actions and decisions”. Duke must reaffirm these ideals and clearly assert that those who orchestrate and commit murder with impunity, especially from positions of political power, can teach us nothing about “reinforcing the rule of law” or “protecting the principles of democracy.”


We, the undersigned members of the Duke community, the academic community, and the broader public, demand this event be cancelled out of respect for Livni’s victims and their families and to reject the normalization of war crimes and their perpetrators. The talk, entitled “Israel, the United States & the Middle East: Threats, Challenges and Opportunities”, is being organized and sponsored by the American Grand Strategy Program, Duke Israel Public Affairs Committee, Duke University Middle East Studies Center, Duke’s Political Science Department, and the Sanford School of Public Policy. Duke’s Department of Political Science and the Sanford School of Public Policy are responsible for the education of future policy analysts, journalists, government officials, and world leaders; to valorize a known war criminal for the so-called merits of her blood-soaked time in office does a dangerous disservice to future generations and past victims. Meanwhile, the Middle Eastern Studies Center, in sponsoring Livni, is directly violating its mission to help students “understand the Middle East” by posing “wanton destruction” as a feasible alternative to learning to live alongside and respect those from whom we differ. We will not be silent as Livni glorifies crimes against humanity, evades justice and accountability, and minimizes the lives and deaths of her victims.