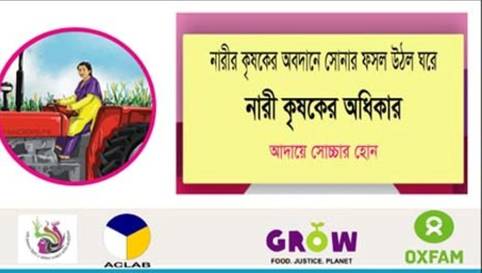 Women constitute almost half of the farming population of Bangladesh. Besides crop sector based agriculture, women are actively involved in forestry, fisheries and livestock production. As a key player to food security, they contribute to agriculture sector as managers, unpaid labours and wage labours. They have immense contribution in seed preservation, and food grain storage by applying traditional knowledge. Our indigenous women also play dominant role in practicing indigenous and environment friendly cultivation practices. Besides, home gardening which is an emerging area of nexus building between family’s nutrition and health is also almost exclusively managed by women.

However, women’s contribution to agriculture, is counted as unpaid family labor, and is grossly underestimated like women’s contribution in other areas of private and public life, though women bear extensive workloads with dual responsibility for farm and household production. Women tend to be “invisible” in the agricultural sector in Bangladesh, owing to the assumption that women are not involved in agricultural production, and because of cultural norms that value female seclusion and undervalue female labor.

Though Constitution of Bangladesh guarantees equal rights of men and women but only in public spheres, and all personal matters are regulated by respective religious laws which are discriminatory. Notwithstanding constitutional guarantee of equal rights, women are discriminated against in all spheres of life. Women experience inequalities in the family, in the community and in the workplace. Legal and policy provisions do not recognize women’s equal rights in fundamental areas, such as, right to property. In respect of Bangladesh, a study finds that men own 96% of land where women own the remaining 4% of land. Although equality is enshrined in the legal system, in 1996, only 3.5 percent (0.62 million) out of 17.8 million agricultural holdings were female owned. Consequently a significant number of women farmers in Bangladesh are unable to access fertilizer, cash assistance and other government subsidies intended for farmers, because of the lack of the land ownership.

Women are not only less likely to hold land; they also typically control smaller land holdings than men. Female-headed households have been found to own much less machinery than male-headed households. Livestock holdings of female farmers are also much smaller than those of men, and women are much less likely to own large animals, such as cattle and oxen, that are useful as draught animals. The size of the gender asset gap differs by resource and location, but its underlying causes are repeated across regions: social norms systematically limit the options available to women. Source: FAO, 2011d.

A 2011 report by Bangladeshi researchers indicates that from 1999 to 2006, participation by men in the agricultural labor force declined by seven percent, while female agricultural laborers increased by 103 percent to 7.7 million. The report notes that as men move from farming to the service industry and other non-agricultural sectors, women are gaining more acceptance as paid farm managers and post-harvest processors. However, even with their increased participation in the labor force, women continue to be paid less than men.

As they don’t get the state incentive, consequently they have to bear higher production cost compared to men. Their production also gets reduced as they get very limited opportunity to increase their capacity in using technology in agriculture. Moreover, due to limited access to markets they get lower prices for their products. As a result of the above challenges and others, women small scale farmers have been in constant struggle to produce enough food for their families and communities around them. Women are paid substantially less than men for agricultural activities. Currently women’s agricultural wages are 41% less than men’s which is an improvement from 2007/08.

Influenced by gender stereotyped role of women, despite women’s huge contribution in agriculture, women are not officially recognized as farmers. Other practical challenges women experience are: lack of decisions over agricultural production, income and expenditure, ownership and access to productive resources such as, land, livestock, agricultural equipment, and credit, participation in social life, increased responsibility and lack of time for rest and leisure.

[iii] http://www.irinnews.org/Report/93851/BANGLADESH-Bureaucratic-hitch-leaves-women-farmers-high-and-dry: The problem, according to Sharmind Neelormi, an associate economics professor at Jahangir Nagar University in Dhaka who has studied gender trends in farming, and others, is that the Agriculture Input Assistance Card (AIAC) programme requires eligible cardholders to own land