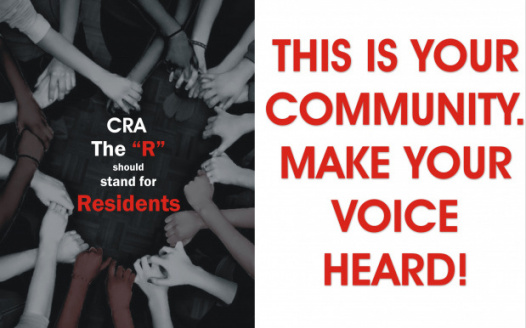 CRA - The "R" stands for Residents

There is widespread dissatisfaction amongst residents of the CRA community about the manner in which the newly, self-elected CRA Executive Committee came into office. The subsequent conduct of certain elements of the Executive is destroying the CRA reputation built up over many years with the residents. This loss of reputation will become increasingly difficult to rebuild over time.

On 2 July a formal call for a Special General Meeting (SGM) to address these issues, signed by over 70 residents of the CRA community, was sent to the CRA chairperson. The Chairperson of the CRA Executive has dismissed this legitimate request by CRA members without even discussing her decision with the CRA executive committee.

We are now urging residents to take matters back into their own hands, and force the CRA executive to honor the rules of the constitution. Any resident of Craighall, Craighall Park and Dunkeld West can support this initiative by signing the petition below. You have the option to suppress your name if you don’t want it to appear in public.

When it comes to the SGM, only paid up members can vote so we urge you to sign up and pay your fees so you too can have a say in how our suburb is run. If you have already paid, please provide your street address and remember that paid up householders in a complex also have a vote.

Formal Requirement for Special General Meeting of the Craigpark Residents Association as provided for in paragraph 12.4 of the Constitution of the Association:

This correspondence has been authorized by in excess of 30 contributing members of the Craigpark Residents Association (CRA).

The purpose of this correspondence is to compel the calling of a Special General Meeting (SGM) of the CRA in accordance with the provisions paragraph 12.4 of the Constitution of the CRA.

The business to be discussed at the SGM is to consider and vote on motions brought collectively on behalf of by the members of the CRA who have signed in support of this correspondence on the following terms:

1.2 to the extent that members of the Executive Committee took office by default owing to the failure of the AGM to conduct an election, this process was inconsistent with past practices adopted by the CRA in such matters and violates the spirit of the Constitution of the CRA.

2 That if the motion above is passed, that:

2.3 the ad hoc leadership committee take such steps as may be necessary to convene a further SGM within no more than 90 days following the passing of this motion, the purpose of which SGM will be to elect an Executive of the CRA.

I attach hereto the names and signature of in excess of 30 contributing members of the CRA as required for the calling of an SGM.