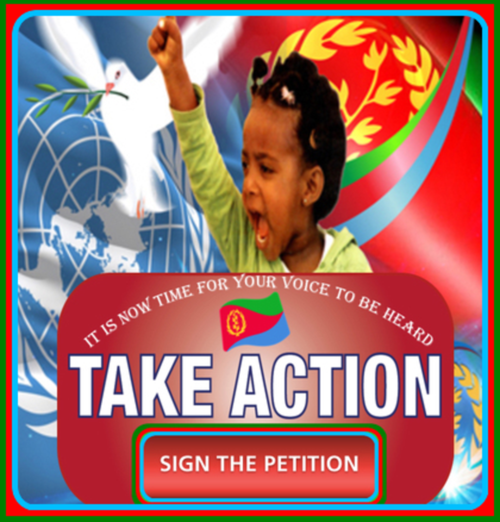 Call to petition to all Eritreans and Friends of Eritrea

They have tried to defame our country Eritrea with their fabricated COIE report which was written through incorrect data collection in enemy countries and organised by individuals who are proven to be anti Eritrea. Additionally plagiarism content in the report had forced the authors to apologize publicly.

It is now time for your voice to be heard and your signature to tell the real human right data about Eritrea to be recorded. Please give few seconds of your time for our beloved Mother land Eritrea”“ሕጀ ድምጺካ ሃብ ግድን’ዩ ዓወትና”

UN and its machineries currently continue to Sanction Eritrea unjustly causing misery to ordinary Eritreans. This was done through allegations and through reports, which was admitted to be baseless.

UN Human Rights Rapporteur has been campaigning and instigating human right accusation against our beloved Mother land Eritrea. Eritreans are asking Where was UN when Ethiopian air force and tanks were massacring Eritreans in masses. Where is the UN action against Ethiopia occupation of Badme for over 13 years ignoring international ruling and virtual delimitation.

Remember the reports by Monitoring groups had grown in to sanctions. We must stop the so called Human Rights Rapporteur from using invalid method of fake data collection with an intention to harm the people of Eritreans. Please share the petition to all Eritreans and to all peace loving people of the world.