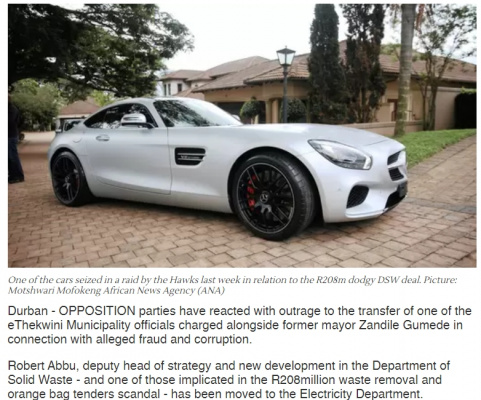 Call to accountability: Charged eThekwini Official (Robert Abbu - implicated in the R208million) must be suspended pending outcome of investigations.

We call on all law abiding members of the public to digitally sign this petition.

South Africa has for to long seen no end to corruption and mockery made of the Justice System.

We the digitally signed hereby request for the Courts to impose stricter judgments and conditions especially of those member of Council and or represent Government and or Political Parties who have been charged for corruption.

We request for one of the bail conditions to be implemented and enforced alongside other imposed conditions to prevent the charged officials from returning to work to interfere with witnesses and or evidence ie possible tampering and or intimidation.

We the public of South Africa plea with the Honorable Courts to make right and assist the relevant appointed investigation law enforcement officers by removing all stumbling blocks that will impede, hamper or delay investigations against the charged officials.

We plead with the Courts to impose stricter handing down of sentencing against corrupted officials of the state as well as their accomplices, as they would have premeditated the crimes they were committing thereby having full knowledge and intent of what they were doing at all times, including the possible consequences that may occur if been caught. ie: calculated risks were taken!

South Africa is a beautiful country that was once highly and internationally respected, and has such become a daily comedy for the world!

Lets together start, by weeding out the corrupted officials one at a time.

We call upon ALL Political Heads to be accountable and uphold the law of the land, hereby also been accountable to each other regardless of your religious beliefs or choice in political party.

Circumstances of Newspaper article to follow, showing the mockery they have made to the justice system as well as the mockery those who were tasked in the investigations and arrests of the politically linked charged / implicated officials.

Durban - OPPOSITION parties have reacted with outrage to the transfer of one of the eThekwini Municipality officials charged alongside former mayor Zandile Gumede in connection with alleged fraud and corruption.

Robert Abbu, deputy head of strategy and new development in the Department of Solid Waste - and one of those implicated in the R208million waste removal and orange bag tenders scandal - has been moved to the Electricity Department.

The decision was apparently taken to prevent the managers involved in the tender scandal from interfering with the ongoing investigations.

EThekwini city manager Sipho Nzuza confirmed Abbu had been transferred to the Electricity Department because of the investigations under way by the Hawks, but would not comment further about the decision.

“This is a clear demonstration that the city will respect institutions tasked with dispensing justice and we will operate within them,” he said.

Abbu, supply chain manager Sandile Ngcobo and contractor Hlenga Sibisi were arrested in May after the Hawks’ National Clean Audit Task Team investigation of the tenders.

The Hawks swooped on the trio and six others in connection with the awarding of a R208m waste removal tender to four service providers. They are all out on bail of R50000 on condition that they do not interfere with witnesses in the departments they work in.

It’s believed the service providers were paid huge amounts although they did not render any services.

Former mayor Zandile Gumede and councillor Mondli Mthembu were also arrested in connection with the matter and released on R50000 bail each.

On Thursday, Gumede’s properties and those of Abbu, Mthembu and Ngcobo were raided by the Hawks and Asset Forfeiture Unit (AFU) to preserve about R51m in assets.

DA caucus leader Nicole Graham said it appeared that the municipal officials fingered in the fraud were being moved from one department to another so that they did not interfere with their current departments.

Graham said the city was well within its legal rights to suspend the accused managers. “Human resources needs to account for this. I’ll be writing to the city to ask who took the decision and why, because this is becoming a joke,” she said.

IFP councillor and exco member Mdu Nkosi said he was unaware of Abbu’s transfer - if it was true, it would be a “disgraceful” decision.

He said moving Abbu, who had “a dark cloud of serious fraud and corruption charges hanging over his head”, to the Electricity Department was “not a good move”.

“What the city is basically saying is that people can do whatever they want with the taxpayers’ money and when they get caught, they have the luxury of being moved to another department. The city manager will have to answer, because we can’t continue to keep managers who are suspects in office with the whistle-blowers.”