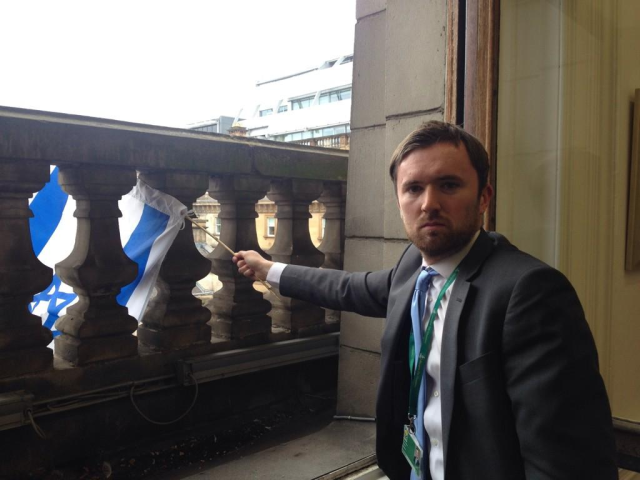 This petition calls for the immediate resignation of David Meikle from his position as Elected Local Councillor with Glasgow City Council representing the Ward of Pollokshields.

His decision to fly the Israeli flag on Friday 8th August -without any authority or formal consent from the top floor of the City Chambers, overlooking George Square, and whilst the Palestinian flag was being officially raised on the approved authority and consent of The Lord Provost of Glasgow leaves us, the Citizens of Glasgow and in particular the constituents of his ward, with no option but to move a vote of No Confidence in his tenure as a Local Representative of the Ward.

We believe his actions have been very insensitive to the majority of his constituents and Glaswegians at large.

He has shown no regard to the views and feelings of his constituents. His behaviour shows total disrespect to the decision of The Right Honourable Lord Provost and total disregard for formal procedures and protocol. He has tried to undermine The Lord Provost's authority by proceeding to fly the Israeli flag from within the Chambers. He has tried to ridicule the very serious issue of the Israel-Gaza conflict and the numerous innocent lives lost in it. His actions have belittled the sincerity of The Lord Provost's attempts to call for peace and an end to the ongoing conflict. He has acted irresponsibly by posting pictures of his actions on social media in order to highlight his defiance. He has clearly attempted to bring shame on our City, which we are all proud of, by tarnishing its reputation with his actions.

He is entitled to his beliefs and opinions but because of his unprofessional conduct, the place and the timing of his expression leads us to believe that he can no longer represent us and should therefore resign immediately.