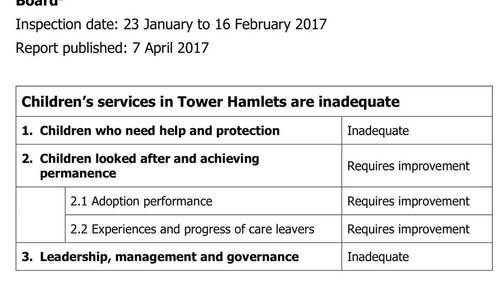 We, the residents of Tower Hamlets call for the immediate resignations of both Councillor Rachael Saunders and Director for Children's Services Debbie Jones after a damning Ofsted Report which rated Tower Hamlets Children's Service and its Safeguarding Provisions as being 'Inadequate' - the lowest grade possible. They inherited a Children's Service which was rated 'Good' with outstanding features but have failed miserably to maintain our proud and long standing record of achieving either 'Good' or 'Outstanding' ratings.

The report singles out lead member for Children’s Services, Councillor Rachael Saunders, as having failed in her responsibilities, noting that “the lead member has not exercised her responsibility as a participating observer at board meetings since her appointment in May 2015, weakening her ability to scrutinise and hold [paid officials] to account.”

It also notes “The chief executive, DCS and elected members did not know about the extent of the failures to protect children from harm until this inspection…A lack of critical enquiry, combined with an over- reliance on inaccurate performance information and an over-optimistic self- assessment, means that senior leaders and politicians have failed to take effective action, leaving children at risk of harm.”

It also notes "Leaders and managers are unable to assure themselves that children in Tower Hamlets are safe"...and the service was "not discharging all of its statutory function."

And actions taken by the Town Hall since July 2015 “have not been sufficiently systematic or effective in addressing the widespread concerns, and consequently children in Tower Hamlets have been left at actual or potential risk.”

Debbie Jones was Ofsted National Director for Social Care (2013-2015) prior to her mysterious appointment at Tower Hamlets Council. During Debbie's time at Ofsted, she introduced its controversial single inspection framework for children services. Nearly half of councils inspected under the new framework have seen their rating fall. Ofsted's credibility was called into question since this framework was implemented alongside the 'Trojan Horse' scandal which she was also linked to. Now Debbie herself has failed to meet the very standards she helped create and introduced.

We have lost total confidence in Debbie Jones and Cllr Rachael Saunders and find it deeply troubling to know that they continue to remain in their posts in which they have failed so miserably in fulfilling, casting doubts into the councils 'commitment' in making the rigorous improvements needed to restore the credibility of Children's Services, public confidence and most importantly to ensure our children will be kept safe.

Here is that damning report: https://reports.ofsted.gov.uk/sites/default/files/..