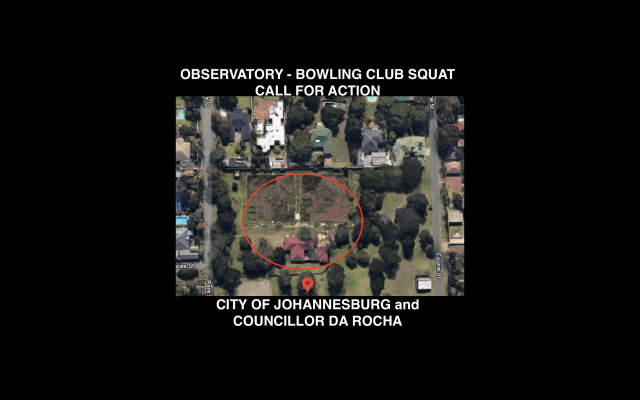 Call for action from COJ for Bowling club (observatory JHB)

Residents of Observatory in Johannesburg have been living for months if not years with an unacceptable situation. A public utility is currently being hijacked by a population apparently renting to someone. This building used to be a bowling club, and became an illegal squat.

On the night of 30st of August 2022, the direct neighbors of the bowling club experienced big fires. Firefighters have been called and many complaints sent to SAPS.

It has become obvious that the residents are desperate and powerless against this situation.

We are calling the City of Johannesburg together with our councillor, to take direct action to terminate the nuisance, destruction and disrespect of this situation by :

Relocate the people of the squat and renovate and rehabilitate the bowling club to its original function.

Relocate the people of the squat and destroy the building.

Please sign this petition to help families and communities of Observatory in and claim security and accountability for a better life in Johannesburg.