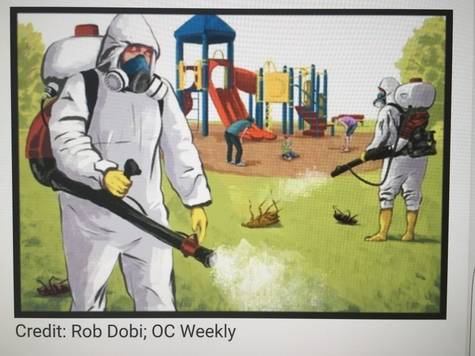 California to Stop the Spray

477 people have signed this petition. Add your name now!

We the people of this great State of California Oppose Senate Bill 382, local control for monitoring and all vector control activities must remain at the local level and NOT on a State level, Oppose the California Department of Food and Agriculture (CDFA) program to spray for light brown apple moth or any other insect, Oppose any and all permits issued by the Water and Air Quality Boards to allow for Aerial spraying of pesticides and herbicides by exemption and without an environmental impact report and public comment, Oppose Cal Trans using pesticides on our freeway systems for weed control, Oppose permits granted to the California Department of Water Resources, any other municipal or local water agency to spray pesticides and herbicides in or near our drinking water, watershed, streams or lakes, Oppose spraying pesticides near schools, parks, freeways, hospitals, medical buildings and nursing homes, Oppose fracking waste water being applied anywhere near or on agriculture, Oppose the use of rodenticides, pesticides and fertilizers in our food products and agricultural system, Oppose food irradiation.

We support a fertilizer tax for the clean water fund, we support all preemptive laws in the California Agricultural Code being immediately removed from the books, enough special treatment to the chemical industry and frackers. We ask our representatives to take a stand in all offices to protect our health from the overuse of pesticides, herbicides, adulticides, larvicides, rodenticides, currently used or proposed to be used in the future. We support a stronger EPA. We support individuals to have control for mosquito control by the use of common sense measures, we do not need state assistance in this.

For the sake of the health of our CHILDREN, our families, for clean air and water, to not wipe out all the beneficial pollinating insects such as bees and butterflies.

It is imperative that the State of California stops contributing to the high cancer rates in our children and citizens by ceasing the heavy reliance on products that harm and KILL. A product with the CIDE on the end means to kill. It does not discriminate and harms everything.

In the case of mosquitos these pesticides also take out the beneficial insects that would keep mosquito populations in control. The pesticides also harm our immune systems and make it more likely we will be ill. Even in low doses these products are harming our health especially our children, there is a large body of evidence supporting this. Additionally, the sprays have been determined to be ineffective and causes more problems than they solve. STOP USING OUR TAX DOLLARS TO POISON OUR FAMILIES.

Thank you for listening to the people in this great state that you represent. We have all had enough of the constant spraying by every agency and the out of control methods being employed. All IPM guides in the past had pesticides and herbicides as a last result – now it is the first this that is done - ENOUGH. The cancer rates in our children and the loss of the pollinators is a tell tail sign of how fool hearty this out of control approach is.

Reasons to support our health when pesticides, herbicides etc.. are used:

Opposition to permits to spray our water