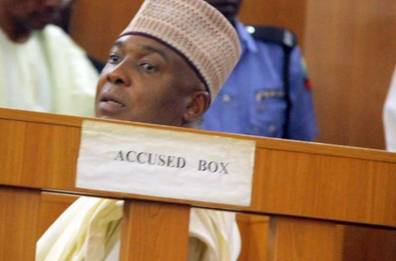 LET IT BE KNOW, BUKOLA SARAKI MUST RESIGN

Let it be know, the senate president Bukola Saraki must resign. Nigeria cannot afford to have a senate president who have been charged with 13 (thirteen) counts of corruption, including: Multiple false declaration of assets, acquisition of asset not attributed to his income (public funds), gift or loan approved by the CCT, anticipatory assets declaration (which he claimed he already owned), acquisition of state landed properties totaling N325,000,000, operation of illegal foreign bank account while serving as the Executive Governor of Kwara State and making transfer of $73,223,28 (Seventy Three Thousand, Two Hundred and Twenty-Three Thousand Dollars, Twenty Eight cents) from Guaranty Trust Bank Plc. domiciliary account No: 441441953210 to the American Express Services Europe Limited, accompanied by $3,400,000.00 to the same bank account, refused to declare leasehold interest in No. 42 Remi Fanikayode Street, Ikeja, Lagos, which he acquired through his company Skyview Properties Limited, From First Finance Trust Limited on 12th December. Moving forward, Nigerians must do away with our public officials who's paths are not close to clear. Sign this petition to fight for a better tomorrow.