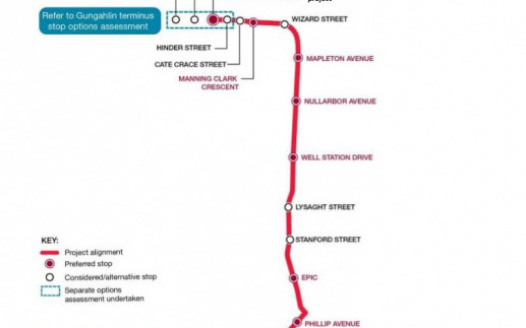 709 people have signed this petition. Add your name now!

The Mitchell Traders Association (MTA) seeks your support in lobbying the government to reinstate the proposed light rail stop in Mitchell. We would like the stop to be included into Light Rail Stage 1 - Gungahlin to Civic.

The Mitchell Traders Association has 250 members. The business owners that are part of this collective are made up of various trades that includes building and construction, adult services, automotive, food, manufacturing, transport and distribution, retail, wholesale, personal services, utilities and electro-technology, communication, information technology, marketing, furnishing, light manufacturing, textile, clothing and recreation.

The business community in Mitchell is a thriving business hub that employs over 4000 workers. In terms of jobs, Mitchell outperforms Gungahlin, Dickson and Braddon according to the 2011 census!

According to the government in their document entitled ‘Capital Metro Light Rail Stage 1 – Gungahlin to Civic Environmental Impact Statement, Vol 1, 2015’ the reason why Mitchell was 'bypassed' by the light rail was because the government thought not many people would use the light rail in our area. They were wrong and didn't even directly ask Mitchell businesses.

We feel the government did not adequately consult with the business community in Mitchell before they removed the proposed light rail stops in Mitchell.

We ask our fellow Canberrans to support us in our time of need. It is true that we missed out on important consultation dates with the government. Only because we were hard at work trying to earn an honest living. We as constituents thought our government would look after our best interest but we were wrong.

We ask Canberrans to remember us, and humbly remind the citizens of Gungahlin that it was our members of the then Mitchell-Gungahlin Chamber of Commerce in the 1980s that fought to have Gungahlin developed. Still today, the skillset of our trades continues to contribute to the building of newer suburbs in Gungahlin.

We find it disappointing that our peers who are contracted to build Canberra’s light rail are unable to build a station in their area and for their own colleagues. The Depot is built in Mitchell, and everyone thought there would be a stop because it was logical and obvious to have one at the depot and in a a business area.

We know the government has provisions for a light rail stop in Mitchell and will have the stop built if there was a demand for it. We are asking for those provisions to be dispersed together with the allocated contingency funds set aside to be used for reinstating the proposed light rail stop in Mitchell. We want assurance from government in writing!