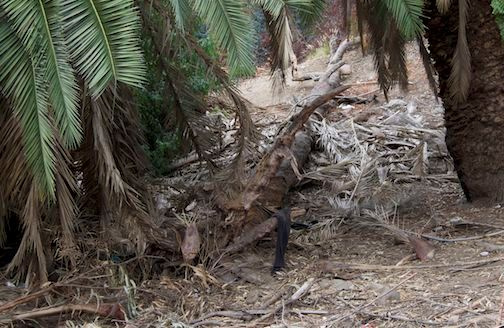 Petition on Brush Abatement in the Vermont Street Bridge Canyon

For decades residents of University Heights have asked the City of San Diego to remove dead trees and overgrown vegetation from the Vermont Street Bridge Canyon, also known as Camelot Canyon. The condition of the canyon has created an extreme fire hazard and attracted homeless encampments resulting in bio-waste and degradation of the canyon’s bioswale. Multiple requests from the residents failed to result in action by the City.

On March 27, 2018 a major fire broke out in the canyon causing the Fire Marshal to issue citations to Caltrans and the City, both of whom are responsible for maintenance of the canyon. Caltrans worked for twelve full days on the west end of the canyon, employing a large team of workers and an extensive amount of equipment. The result was prompt, complete clearing of dead trees and brush and thinning out of the remaining dense vegetation. By contrast, the City worked five partial days on the eastern portion with a small team, leaving much work undone despite the Fire Marshal's citation. Due to the untrimmed, low and dense tree canopy which provides them cover, new homeless camps spring up in the City portion of the canyon as soon as existing ones are removed. Residents were not surprised when another fire broke out on October 28, 2018.

We have all witnessed the devastation of brush fires that quickly get out of control in California. The abundance of rain this winter will increase the overgrowth, making completion of the brush abatement even more critical. Thousands of residents and the businesses close to the canyon need the city to do what is needed to prevent a disastrous fire in our neighborhood and address the unsightly and unsanitary conditions caused by the homeless encampments.

By signing this petition, we are asking the City to eliminate the clear and present danger of fire in the canyon by taking prompt and thorough action to complete the brush and vegetation abatement per the Fire Marshal's citation.