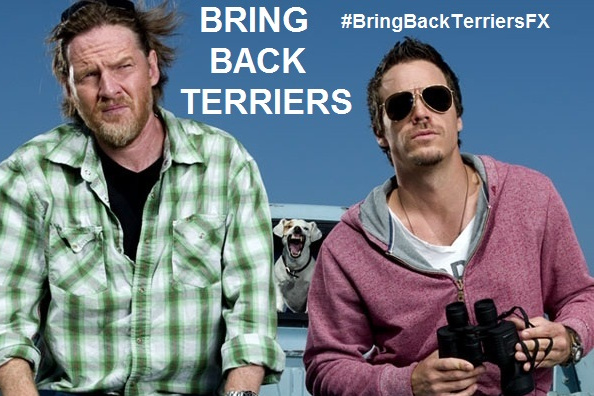 I know what you're thinking, why after 5 years should this show be brought back?

'Twas during that awful drought of good shows to watch when everything decent has gone on break. I stumbled across this masterpiece when I and many others were left to either twiddle our thumbs until the next season, or scrounge through Netflix to find something of worth to watch with our dinner. Being a Donal Logue fan, Terriers was on my Netflix queue and staying there for quite some time, because I had always thought the show was about dogs or dog bounty hunters (it wasn't).

Terriers turned out to be an extremely pleasant surprise, and it didn't take long at all for me to become invested in each character (this petition is a pretty good showcase of that). The show not only had an incredible cast, but original writing. I was immediately hooked, then heartbroken to find it only lasted one season. After watching all 13 episodes in a pretty short amount of time, I knew for a fact FX's decision to cancel Terriers was too hasty. Clearly the show's low ratings were not due to bad writing or bad acting, but poor marketing. With the following it's developed over the years, I could see it going on for many more seasons if FX picked Terriers back up.

In a time when good shows are hard to find, Terriers deserves a second chance.