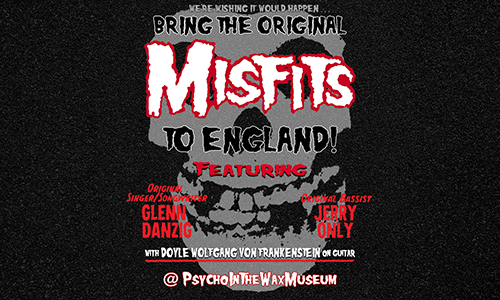 BRING THE ORIGINAL MISFITS TO ENGLAND

THIS PETITION IS TO TRY TO BRING THE ORIGINAL MISFITS OVER TO ENGLAND AND/OR EUROPE...THE WORLD!

UK Fiends are missing out on the original Misfits shows in America. Not all of us can afford a plane ticket and a hotel for a couple of nights for a show in America, as much as we would love to.

The Original Misfits featuring Glenn Danzig, Jerry Only and Doyle have played 4 reunion shows in America. Two Riot fest shows in Denver, CO and Chicago, IL in December 2016 and most recently, Las Vegas, NV and Los Angeles, CA in December of 2017.

Judging by the bands last two shows we might be looking at a possible two more shows in December this year, next year and who knows...so, IF that turns out to be true, lets try to make it very clear that we would love to see The Original Misfits over in the UK!

We would love to see The Original Misfits come over to the UK even if it is for just one show.