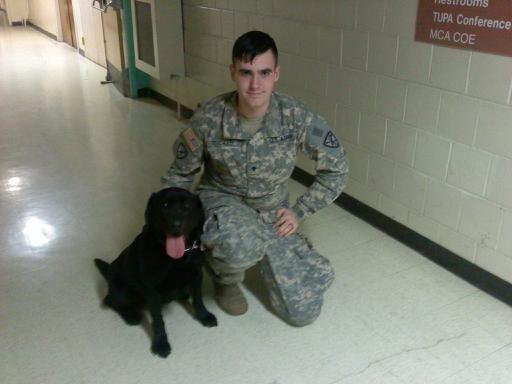 SSD Ellen is a Military Working Dog. She deployed to Afghanistan with my husband SPC Joshua Tucker from April 10-11. He was injured on that deployment and Ellen was returned to Lackland AFB to be reteamed.

Josh's doctor has recommend we petition the Army to release her from her duties to the US and allow her to retire and be my husband's service dog. Please help us achieve that goal!
A little more info::
So I haven't really explained what's going on... Here's a little back story: Josh got Ellen at Lackland AFB in 2009, he deployed with her out of Ft Lewis WA April 10-11, less then 90 days after they got home we (us and Ellen) PCSed to Ft Myer VA. The true seriousness of Joshs combat wounds showed about 30 days after we got to Myer and he was hospitalized for 3 months.
The whole time he was hospitalized his unit promised him Ellen was waiting for him and to just get better... Finally the day before he was released the unit called me and told me I needed to tell him Ellen had been sent back to Lackland months ago and he wasn't getting her back. It was the hardest thing I've ever had to say to him.
That was 2 years ago. We have been fighting ever since to get her back. His doctor has written many letters stating Ellen needs to be returned to Josh as HIS service dog if we have any hope for a meaningful recovery from the PTSD.
I went to congress and they submitted paperwork requesting Ellen be returned and retired and the Army heartlessly said no. If you ask me, by saying no they are turning their backs on the recovery of a soldier who was wounded while serving our country in Afghanistan.
I'm hoping with enough public support and attention they will return Ellen to Josh and allow him to recover...
Thank you for taking the time to read this and to support my family in this goal!