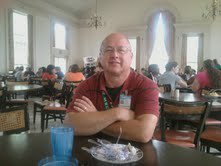 Tyler Aiden says, "Robert was asked, by students, to be in the junior dads ceremony last year. One of the highest honors for male faculty at our school. If he doesn't fit the image then maybe it is not the true image of our Boldly Baldwin women."

FaNiqua Hill says, "I am at shocked! Robert is a well respected man and he demonstrated such love and care to each and every student. He is the type of man who never missed a beat of making individuals smile and laugh! He is always willing to help in anyway he can whether it's big or small and not once did he fail to be at our rescue! In all four years of being a student at MBC not one bad word was spoken towards Robert from anyone that I know of!"
Ciarra Mccloud says, "Mr. Robert was a professional man who enforced security, showed respect and communicated amongst everyone. He was dedicated to his job and duties. In fact, his personality and character were the qualities that every security officer andadministratorin law enforcement should obtain. Mr. Robert deserves nothing but the best and the best was the joy and adherence he brought to MBC!"
Kelli Szvetecz says, "Bring back the most kind hearted and sincere man on MaryBaldwin'scampus. He made us all feel safe and we could go to him with any problem no matter how big or small. He was and still is the best security guard we will ever have.Robert Richardson. We love you Robert!"
Gabrielle Sutton says, "There is no one in campus security that I trust more than Robert."
Himanshi Patel says, "Mary Baldwin College One of the few things you told us when we moved to campus was to communicate; if there was a problem, let someone know. And the one time we are doing what we truly feel, do not let us down. We love Robert very much. He has done the smallest things that has lightened up our days; putting a smile on our faces, making us baked foods, and definitely cheering us up with his great sense of humor. So on the behalf of the whole campus, please bring him back! Doing that will be the greatest blessing from the Lord and we will not be any more happier!"
Jessica Applegate says, "Rob was the best security guard MBC had."
Michelle Roumillat says, "Robert is amazing, sweet, kind, funny, and perfect for Mary Baldwin. Campus just is not the same without him and as his friends, it is our responsibility to try and bring him back."
Heather Marie says, "Even when we were loading one of my roommates up in an ambulance one day, Robert still managed to put a smile on our faces.
It is a FACT that he improves the lives of those around him."
It is clear to all of the MBC student body that Mr. Richardson made us all feel very safe and took great care of all of us.