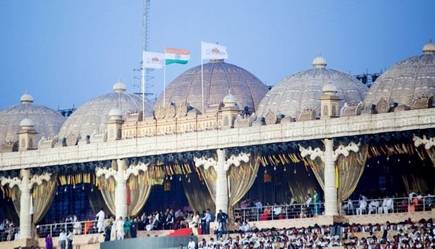 RE: Attempt to discredit the Art of Living Foundation and its Founder, His Holiness Sri Sri Ravi Shankar.

1. The Art of Living Foundation’s unwavering commitment to biodiversity preservation is demonstrated by its environmental initiatives.

The Art of Living Foundation and Sri Sri Ravi Shankar are champions of environmental preservation. The Foundation’s commitment to engender a sustainable environment is clearly demonstrated in its many initiatives, including the “Mission Green Earth” that has resulted in the planting of millions of saplings across the world, the “Chemical-Free Farming” initiative in India, Haiti reforestation programs, and water harvesting initiatives. Of particular note is the Foundation’s river rejuvenation initiative, which has resulted in the cleaning and restoration of 22 rivers and river beds across India.

2. The Art of Living Foundation has documented its efforts to ensure that the WCF had negligible effects on biodiversity around the Yamuna River.

Both before and after the historic WCF, the Foundation organized a massive restoration of the Yamuna River. In a letter to the Delhi Development Authority (DDA) dated December 14, 2015, the Foundation notified the DDA that 25-30 acres of the Yamuna’s plains were covered in construction debris, and offered to clear it up. The Foundation’s initiative resulted in:

The Foundation’s effective efforts to clear up the Yamuna, often referred to as one of India’s most polluted rivers and a “sewage drain” with a biochemical oxygen demand values ranging from 14 to 28 mg/L and a very high coliform content, won accolades. In fact, in the wake of the Foundation’s success, New Delhi’s Chief Minister invited the Foundation to partner with the Environment Ministry to further it’s cleanup efforts.

3. The NGT-appointed expert committee’s assessment of the alleged damage, and the subsequent penalty, has been arbitrary, lacking in scientific support, and devoid of due process.

The NGT-appointed expert committee hurled sweeping allegations against the Foundation, accusing it of having “completely destroyed” the floodplains of the River Yamuna. These allegations have no empirical bases, are unscientific, devoid of due process, arbitrary, reckless, and irresponsible. From the onset, the committee displayed lack of competence. On the eve of the WCF, the NGT-appointed committee demanded (in a highly publicized manner) that the Foundation pay INR 120 crores as compensation for alleged environmental damage. The agency provided no scientific basis for this figure. Upon inquiry, the NGT-appointed committee was quick to backtrack and reduced the figure to INR 5 crores, a reduction of 96%. Once again, it provided neither a basis for the initial amount nor for the reduced sum. Instead, a seemingly callous statement by the Chairman of the expert committee described the compensation as an “inadvertent mistake.” The committee issued no apology for its blatant violation of due diligence and the fiduciary trust reposed in it by tax payers.

In what can only be termed a tragedy of errors, after assigning a monetary sum to the alleged damage, the committee then set out to investigate the extent of the damage. It later reported that its findings were based on geographic exhibits. The committee did NOT provide the underlying scientific parameters, methodology, data and sample size used, nor the basis of its analyses. It also did not conduct any soil tests to support its frivolous claims that the Foundation “completely destroyed” the Yamuna’s flood plains. Instead, based on satellite exhibits, the report accuses the Foundation of levelling Yamuna’s plains. However, it fails to explain how the Foundation could have levelled an already flat sandy plain. The committee also advances the absurd allegation that the Foundation constructed two bypass access ramps, both of which predates the WCF by at least 15 years. Additionally, the committee declares the area in question to be a wetland, when the Wetland Atlas of India clearly precludes this area.

It has become blatantly obvious that the NGT-appointed committee lacks the requisite expertise and competence to assess damages, if any. Significantly, the committee has violated the basic tenets of due process by failing to consider arguments advanced by the Art of Living Foundation and its’ experts when finalizing these unsubstantiated damages. If this situation is allowed to continue, Sir, it would be nothing less than a grave miscarriage of justice. Justice must not only be done, but must be seen to have been done and this is clearly not the case in point here.

4. The NGT-appointed committee’s treatment of the issue has been biased, unprofessional, and has caused damage to the Foundation’s reputation and the WCF’s mission.

The WCF was a showcase of global unity and peace to 3.5 million live attendees, including foreign visitors and world leaders. However, the NGT-appointed committee’s treatment of the issue, combined with unexplained media leaks and baseless accusations, served to disrupt the WCF’s mission – promotion of a one world family, sans cultural division. It has also tarnished the reputation of the Art of Living Foundation, whose contributions toward caring for the environment, uplifting the human spirit, fostering and brokering peace, and inspiring ordinary men and women to be of service to humanity, are unparalleled. The committee’s claims were completely devoid of any demonstrable basis and this make its’ actions akin to slander. Committee member, Professor C R Babu, has publicly maligned the Foundation through media interviews during the investigations and committee member, Professor Brij Gopal, is a known associate of the petitioner, Manoj Mishra of the Yamuna Jiye Abhiyaan. Babu’s accusations and the Gopal-Mishra connection call into question the integrity of the NGT-appointed committee, and the untoward political motivations behind its’ actions.

5. This Petition requests your support in appointing an “independent” expert committee to review the documentation and assess any impact the WCF may have had on the Yamuna’s biodiversity.

Given the above, we, the undersigned, seek your immediate intervention to:

Anything less than a full investigation, Sir, will be a miscarriage of justice and a breach of the fiduciary trust placed in our higher institutions.