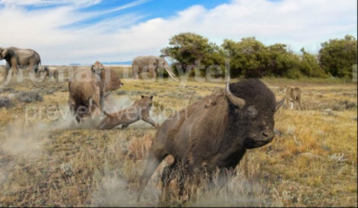 Bring lions,Camels,elephants and rhinos back to the American plain!

Nowadays the United states of America does not have much megafauna.Yet it wasn't always this way. Until only about 10,000 years ago huge creatures like Lions, Camels,Rhinos and many types of elephant used to live on the american plain.Yet about 11,500 years ago humans (native americans) reached the great plain areas from asia. By 9,000 years ago, all of these animals were extinct on the American plain. As a result of this the population of Bison skyrocketed to about two million because their great predator, the american lion was replaced in the food chain by two animals that were total weaklings compared to lions, which were Wolves and Mountain Lions (not actual lions).On the Pacific Northwest and in the Northeastern reaches of the USA Vegetation has greatly changed because of the Absence of Elephants and rhinos, And on the Plains the abundance of small animals dropped because there were no elephants to keep their habitat (grassland) in check. Fast forward to the present and these animals are in dire trouble in Africa.Lions are being killed and are losing land, Camels are dying in war zones and are losing land to humans, Elephants are being killed for tusks and Rhinos are being killed for their horns.Yet there is hope to save these creatures.All we need to do is to take some of these creatures from Africa, and bring them to the great plains where they could live as they used to.You might ask, Well, aren't there people living there now? Well right now people are leaving the great plains by the numbers. The human population of the great plains now is 1/3 of what it was in 1920, and population density averages at 7.7 people per square mile, yet in most regions it's only 2 people per square mile. It's so bad that in kansas alone about 250 towns are ghost towns with no residents.So why not to just do some reclamation efforts to turn these towns back into the prairie that they used to be, and bring the old animals back to this country that used to live here, besides they're safer here than in Africa. So this is why I am calling on the United States government to start to listen to people who advocate for rewilding (like myself) and help to save the megafauna of Africa,to bring them to the place, where these creatures used to live, 10,000 years ago.