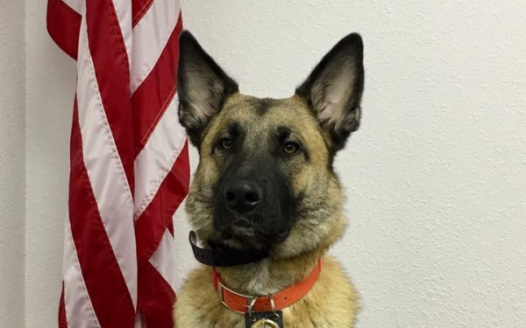 K9 Poseidon has been removed from the only family he has ever known in Camp Point, IL as a result of Steve Patterson's departure on November 6, 2017 as Chief of Police. It's about the power not the money.

Below is an excerpt from Steve Patterson, Poseidon's friend, partner and family member shortly after Mayor Gunn had Poseidon removed from his home:

"POSEIDON HAS BEEN RIPPED FROM HIS FAMILY. Our family's hearts have been forever broken, my kids are crying so hard right now. They had the Quincy Police Department come pick up Poseidon. Some things are completely UNFORGIVABLE. I have offered to pay full price for Poseidon AND pay for a new dog but they have elected to come take him away from his family. Poseidon has never spent a night outside or in a kennel while with me. I cant imagine what is going through Poseidons mind. Please share so everyone can see what these people have done."

They have refused to tell the Patterson family where Poseidon is being held. This is cruel to the family and to Poseidon.

Steve Patterson offered to pay the City to get a new K9 and Steve will also reimburse the City for the training that the new K9 will get with his new Handler. During his time as Handler and "Daddy" for Poseidon, Steve Patterson received the following equipment (at no cost to the Department), (1) AceK9 Heat Alarm, Door Pop, and Watchdog system donated through Protection4Paws, K9 Defender Fund Buddy Bag (K9 Trauma Medical Kit), Bullet and Stab Protective vest and Healthcare grant through Vested Interest in K9s, Inc. The value of all of this equipment exceeds $5,000 and the AceK9 and Buddy Bag were donated through a private sponsor specifically to Steve and Poseidon from a friend in memory of her brother who died after a short battle with bone cancer. The City received all of this equipment because of Steve Patterson and Poseidon. The City is not going to lose anything, except the respect of how they are handling this entire situation.

Village of Camp Point had a Board of Directors meeting scheduled for this evening (November 15, 2017) where community members were allowed to voice their opinion for up to 5 minutes. At this meeting Steve Patterson spoke and offered to reimburse the City for Poseidon (who was donated to the City through funds given to the City from the community that supports keeping Poseidon with his family) and also pay for the training of the new K9. Of course no decision was made!

Time is of the essence!

The entire Patterson family and all those who love Poseidon can't thank you enough for your help.