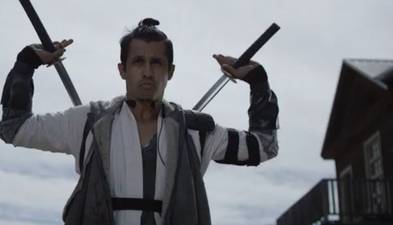 Erik-Michael Estrada got his professional break in 1999 by taking part in ABC’s ‘Making the Band, one of the first reality shows of its kind in major network history. The show chronicled the formation and rise to success of the boy band, ‘O-Town’. The band signed with Clive Davis’ J Records, and released the #1 singles ‘Liquid Dreams’ and ‘All or Nothing’, and achieved platinum success with their debut album. O-Town announced their reunion in 2014 and has been touring the country since. They put on a pretty awesome show so make sure to get to a show near you!

As for the acting side of Erik, he has starred in several indie movies (I was able to attend the premier for Los Lost Ones, which is also a great film that he did really well in) with his most recent being ‘Dead 7’ which was written, produced and directed by Nick Carter of the Backstreet Boys. There were several boy band members that were featured in the film including the other three members of O-Town – Jacob Underwood, Dan Miller and Trevor Penick. The film also contained members of the Backstreet Boys, *NSYNC and 98 Degrees.

The film is a post-apocalyptic zombie movie in which Erik plays the part of Komodo. Once Nick learned that Erik would be available to film the movie he quickly offered him a lead role and he nailed it. If you haven’t seen the film – you need to!

To promote this feature film, Bloody Bombshell (@bloodybent) now represents Erik-Michael and other cast members of ‘Dead 7’. We are trying to get Erik in attendance at conventions across the U.S. To bring him to a convention near you, leave a comment below so we can make a petition for that area. Make sure to sign this petition and share on Twitter tagging @bloodybent and @iamerikestrada - also using the hashtag #Dead7 in your tweets!