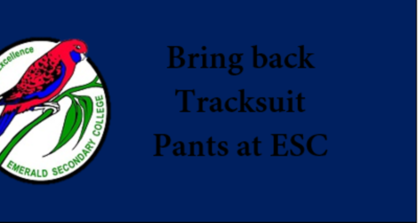 This year the school has changed the option of wearing navy blue tracksuit pants to school and has only allowed wearing trousers.Students claim they do not feel comfortable/confident in wearing these pants. It can make students stressed out and worried about what people think, which can affect their learning. “Teachers are allowed to wear basically want ever they like” stated many students. For teachers to already be allowed to have unnatural coloured hair and non-clear piercings already isn’t fair on students. Sometimes coming to school not wearing the correct uniform can lead to students being trapped in an office all day which honestly isn’t very fair. If you would just allow tracksuit pants back into the uniform students would rebel as much against the rule. In the end we are just fighting for us to keep warm. With winter coming around the corner you still choose to ban any other pants than trousers. When female students inform teachers about them not having the correct pants you suggest tights for them under the skirts and dresses which really doesn’t help since they are so thin but then you don’t have a second option for the male students, which tracksuit pants could solve. If Emerald Secondary Collage wants to be known as the school that cares more about uniform than education and letting students excel in their learning then I suggest you keep this horrible rules and allow more students to freeze.