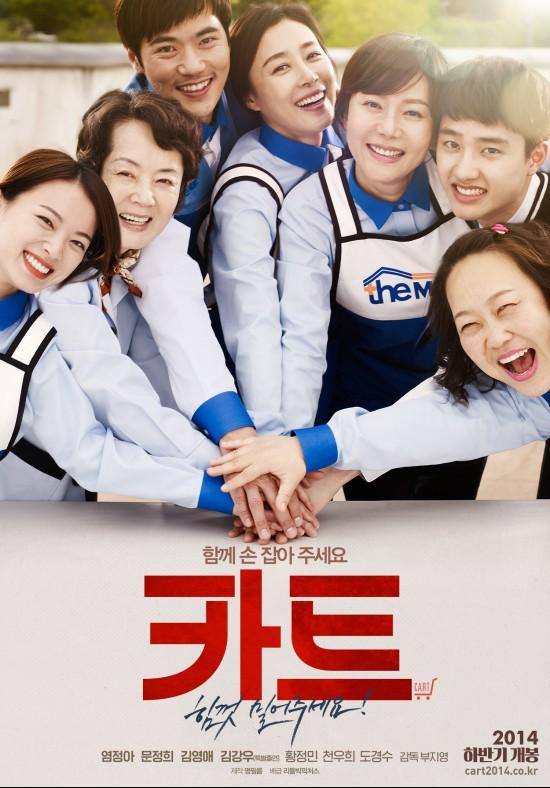 600 people have signed this petition. Add your name now!

HELP US BRING '카트' (Cart) MOVIE HERE IN THE PHILIPPINES!

Sun-Hee (Yum Jung-Ah) is a mother of two children. She works at a large discount retail store as a cashier. Hye-Mi (Moon Jung-Hee) is a single mother and a co-worker of Sun-Hee. Soon-Rye (Kim Young-Ae) works as a janitor at the same store. Dong-Joon (Kim Kang-Woo) is the only male member of the labor union at the discount store. Suddenly, contract workers are laid off at the store. The laid-off contract works stand up against their unfair dismissal.

NOTE
Filming began January 11, 2014 and finished April 30, 2014.
CAST
Yum Jung-Ah as Sun-Hee
Moon Jung-Hee as Hye-Mi
Kim Young-Ae as Soon-Rye
Kim Kang-Woo as Dong-Joon
D.O. as Tae-Young (Sun-Hee's son)
Hwang Jung-Min as Ok-Soon
Chun Woo-Hee as Mi-Jin
Ji-Woo as Soo-Kyung
Lee Seung-Jun as Section Chief Choi
FILM FESTIVALS
2014 (39th) Toronto International Film Festival - September 4-14, 2014 - City to City *World Premiere
2014 (19th) Busan International Film Festival - October 2-11, 2014 - Open Cinema
2014 (34th) Hawaii International Film Festival - Oct. 30-Nov. 9, 2014 - Spotlight on Korea *U.S. Premiere
EXO DO KYUNGSOO '카트' (CART) MOVIE SCREENING IN MANILAPETITION
After casting in drama "It's Okay, It's Love" many of us have been looking forward to Do Kyungsoo's 1st movie casting, "Cart" which will be open in the said theaters with there corresponding dates! The movie will be distributed in some foreign countries -- and we should not miss the chance to experience ourselves, watching his acting on big screen! Not in our computers, laptops, other movie portal, not illegally downloaded nor even pirated but on BIG SCREEN. We are expecting not only Kyungsoo biased to cooperate but the whole EXO-L fandom Philippine based.