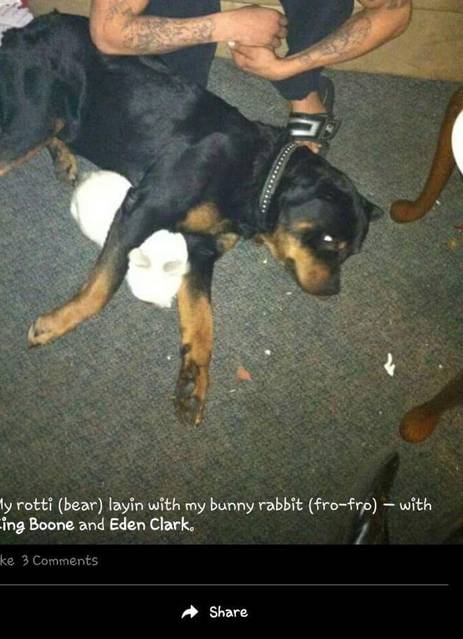 BEAR is a rottweiler that was STOLEN from Earl Boone of Spring Lake, Nc on December 31, 2015.

As soon as bear went missing Earl called animal control to file a missing dog report and proceeded to find his beloved dog that he has had since he was just a puppy born in 2010.

Bear was then taken from Spring Lake city limits onto Fort Bragg Army Base to their veterinary clinic where he was adopted out from under Earl on January 8, 2016....Earl is not military so why would he look on a military base FOR HIS DOG.

Bear had escaped his "new owners" home and greeted me at my front door on January 23, 2016, so I did what was right and found his owner Earl Boone through a facebook post I had made claiming I found a lost dog, his sister then saw the post and had contacted me on facebook about Bear, and gave me Earls phone number, Earl then met with me to verify it was his dog who had been missing as Bear nearly dragged me off my front porch to go hug his lost master and friend, Earl has vet records as well as photos of bear from many years ago, so Bear and earl went home....His new "owners" are trying to falsify documents saying they have had him since 2012 after the woman said she adopted him on January 8, 2016 from Fort Bragg animal shelter, where she works closely with as a vet tech at the animal clinic, and had Police take Bear from Earl even with his proving documents!

Now Earl is being threatened by the womans chain of command threatening to "ruin him" and make sure he is never hired by the state again if he takes her to court to have his dog back. This woman is going by the name Melody Prescott, who is now claiming that is not her real name, she needs to be stopped and stripped of her military career. If earl takes "Melody" to court he could risk being hurt and much worse so we need your help getting this story out there and in the hands of someone who will help Earl. We need to get Bear home