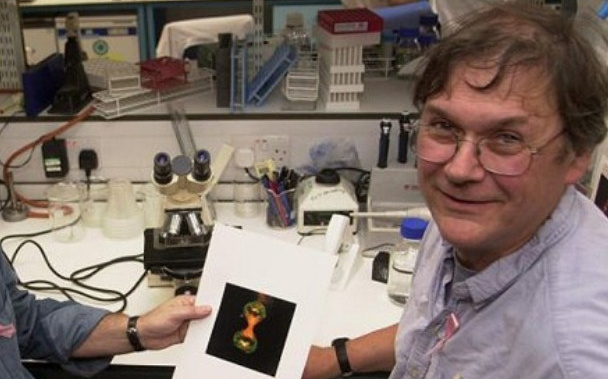 On 10th June 2015, renowned physiologist and Nobel laureate Sir Tim Hunt, a man who "was always immensely supportive of the ERC’s work around gender equality" (Dame Athene Donald) was forced to resign from his post at University College London and later from the European Research Council. The reason? His jocular observation, at a conference in Korea, that men and women tend to distract one another when working together in laboratories:

He then continued: "Now seriously, I’m impressed by the economic development of Korea. And women scientists played, without doubt, an important role in it. Science needs women and you should do science despite all the obstacles, and despite monsters like me."

Aside from the jokey, self-deprecating context, another deliberate irony everyone seemed to miss was that Sir Tim met his own wife whilst working in the lab! Not to mention the broader picture: “No one seems to mention his main speech in Korea in which, according to the ERC President, he was ‘very supportive towards women in science and he said that he hoped there was nothing that barred women from science" (Dame Athene Donald).

Sir Tim later clarified that his remark about women crying was meant to be "jocular", rather than a serious 'catch-all' generalisation. His comment was, however, based on honest observation, gleaned from over half a century's experience as a scientist.

It therefore seems quite plain that Sir Tim's comments were nothing more than a bit of good-natured (and partly self-deprecating) ribbing. But, to the incredulity of both himself and many of his colleagues, a digital witch-hunt ensued, with hundreds of banner-waving tweeters vomiting a bricolage of abuse and demanding he be sacked.

"One or two began tweeting what he had said and within a few hours he had become the focus of a particularly vicious social media campaign. He was described on Twitter as “a clueless, sexist jerk”; “a misogynist dude scientist”; while one tweet demanded that the Royal Society “kick him out”."

Fewer than 24 hours after Sir Tim's remarks, his wife, Professor Mary Collins, one of Britain's senior immunologists, received a telephone call from UCL:

“I was told by a senior that Tim had to resign immediately or be sacked – though I was told it would be treated as a low-key affair. Tim duly emailed his resignation when he got home. The university promptly announced his resignation on its website and started tweeting that they had got rid of him. Essentially, they had hung both of us out to dry. They certainly did not treat it as a low-key affair. I got no warning about the announcement and no offer of help, even though I have worked there for nearly 20 years. It has done me lasting damage. What they did was unacceptable.”

A decision of such gravitas would normally be taken by the council of UCL, which is headed by Dame DeAnne Julius, formerly member of the Monetary Policy Committee of the Bank of England.

However, the London Evening Standard reports the full council wasn't even informed and that its members are furious. “The council was not consulted,” says their source. "There will be many council members and academics at UCL unhappy with this reaction to a silly joke by an elderly professor”.

The crisis snowballed when, in view of his resignation from UCL, the European Research Council (ERC) decided to force Sir Tim to stand down from its science committee. In addition, The Royal Society formally distanced itself from the Nobel laureate.

Is this the kind of Britain we want to live in, where media mobs dictate the disciplinary actions of our most revered academic institutions? Where neurotic online witch-hunts demand cruel, public punishment be inflicted on erudite, elderly scientists? Punishment uncritically executed at breakneck speed by university officials, denying victims even the chance to explain or defend themselves? If you agree that this behaviour is utterly unacceptable, please sign this petition, for the attention of UCL and the ERC, to reinstate Tim Hunt to his former positions (preferably with profuse apologies).

"Judge By Actions, Not Words" - Nature

"Hung Out To Dry" - The Independent

Sacked For Making A Joke - The Spectator

Sir Tim Thanks Female Scientists For Their Support - The Guardian

A Second Petition For Tim!

Are Supporters Of This Petition Poorly-Informed?

An updated statement from UCL, from their website, on the Tim Hunt controversy.

UCL says: "Sir Tim Hunt's personal decision to offer his resignation from his honorary position at UCL was a sad and unfortunate outcome of the comments he made in a speech last week."

What it doesn't say: "Without giving him a chance to explain himself, a senior from UCL telephoned his wife saying he must either resign or be sacked."

UCL says: "Media and online commentary played no part in UCL's decision to accept his resignation."

What it doesn't say: "By the time Sir Tim offered his resignation, UCL had already pressured him to quit, so of course media played no part in our decision to accept his resignation. Social and news media were, however, driving forces behind the initial decision to pressure Sir Tim to resign, especially considering that three influential figures at UCL (Professor David Colquhoun, Professor Dorothy Bishop and Connie St Louis) were Twitter-campaigning against Sir Tim well before his wife received the fateful telephone call."

UCL says: "Sir Tim held an honorary position at UCL. He was not, and never has been, employed by UCL at any stage of his career and did not receive a salary from UCL."

What it doesn't say: "Sir Tim did plenty of teaching and work promoting science. His links to UCL and the ERC were hugely important to this. Now he's considered "toxic" (Tim's own word) by universities in general and believes his career is over.

Tim's wife also feels deeply betrayed by UCL breaking its promise to handle her husband's resignation in a 'low-key' manner."

UCL says: "UCL sought on more than one occasion to make contact with Sir Tim to discuss the situation, but his resignation was received before direct contact was established."

What it doesn't say: "We could, of course, have delayed acceptance of his resignation to allow intelligent, mature and civilised discussion of the subject, but we didn't, because we wanted rid of him."

UCL says: "UCL accepted his resignation of his honorary position in good faith, and in doing so sent a clear signal that equality and diversity are truly valued at UCL."

The UCL council appears divided on whether or not to reinstate Sir Tim. They will meet in a fortnight to reach a decision. The UCL students' union, along with at least two council members, wish to use Sir Tim's case to send a clear message that UCL won't stand for sexism:

Apparently, to push this message, scapegoats are acceptable.

The president of UCL says Sir Tim will not be reinstated, because his comments struck a "discordant note" and because reversing the decision "would send entirely the wrong signal." The power of appearance over reality, it seems:

Please trust in hope. This decision may still change and the ERC has yet to clarify its position.

My email to Professor Michael Arthur, President and Provost of UCL:

A Happy Ending: Sir Tim Back Working For The Royal Society

Sir Tim "will still work with EMBO and the Royal Society from Japan. And he will be afforded the opportunity to travel the world and inspire young scientists, just as he always has."

Thanks to everyone who helped by signing this petition. In the end, your collective voices counted!

First, thanks again to everyone, here and elsewhere, who helped vindicate Sir Tim. I'm especially pleased that his relationship with the Royal Society is still going strong. It's still fascinating to re-read some of the Internet relics of that mad time. For example, Ophelia Benson's blog Butterflies and Wheels alluded to this absurd petition in a manner that suggested any thought of supporting Sir Tim was indefensibly insane.

As you can see, the mockers mocked, with Dunc displaying a violent allergy to visual metaphor (and amusingly thinking a bricolage was a collection of bricks!), PZ Myers missing a famous allusion to Voltaire and Ophelia Benson suggesting that merely suggesting something segregationist as a whimsical hypothetical should be a potentially sackable offence.

Only later did the truth about Sir Tim's full transcript come to light, revealing that he applauded and supported women in science. His so-called sexist comments were, in fact, a pastiche; a send-up of sexist men that he called 'monsters'. For, after gently ribbing, he continued: "Now seriously, I’m impressed by the economic development of Korea. And women scientists played, without doubt, an important role in it. Science needs women and you should do science despite all the obstacles, and despite monsters like me." Sir Tim continued to warmly congratulate women throughout the remainder of his speech, which was capped by polite applause.

Two years on, the furore seems all but forgotten, which, in this continuing age of neurotic political correctness, worries me. As George Santayana once wrote: "Those who cannot remember the past are condemned to repeat it." Who knows when, with hasty intolerance, the next high-profile witch hunt will strike? I hope, when it does, that reason will once again triumph over hysteria.